MORE GREAT READS FOR DECEMBER
The Book of Jonas, by Stephen Dau

Jonas is a teenage war refugee from an unstated country in this debut novel from Stephen Dau. Academically clever, he would prefer to be known as ‘a member of the Global Diaspora’;  it has a more independent ring to it, for a refugee is someone who has no control over his place in the world, instead being utterly reliant on the kindness of strangers in American relief organisations, who, when asked why they are helping him, reply ‘ We are the Right Hand.’
‘The Right Hand?”
‘Yes.  We are here to clean up the mess that the Left Hand has made.’
And this is the crux of this beautiful, tragic story:  the attempts that everyone makes to clean up the mess;  to right dreadful wrongs – in Jonas’s case the destruction of his village by the American military in the mistaken belief that insurgents are using the village to manufacture explosive devices and hide weapons to use against the U.S. soldiers, who initially were there only to help them.
Jonas is sorely wounded in the attack, but manages to escape to a cave in the mountains known to his father.  He is followed by Chris Henderson, an American soldier who is so horrified by the mayhem he and his unit have been ordered to perpetrate on innocent villagers that he goes AWOL.  Chris saves Jonas’s life but is eventually listed as missing in action, a mystery that fractures and divides his family forever;  Jonas is found and eventually taken to the U.S. to start life anew, and every opportunity is offered to him to forget his terrible past and make his home in the Land of the Free.
Sadly, this doesn’t happen:  the guilt that torments Chris into leaving his unit also consumes Jonas, but for entirely different reasons.  This story examines the nature and consequences of guilt in spare and beautiful prose;  it exposes to the reader the dreadful lengths that men will go to live with their shame, and the tipping point that sends them into the abyss.  I hesitate to use the term ‘literary tour de force’;  it can be a much hackneyed phrase,  but in Mr. Dau’s case, no other description will do:  it was a privilege to read this fine book.

Kill you Twice, by Chelsea Cain.

This is the fifth novel in Ms Cain’s series of the battle of wills between Super Detective Archie Sheridan, brilliant but damaged White Knight in the fight against evil, personified by gorgeous serial killer Gretchen Lowell.  (See July, 2011 review below).
Not much has changed in Ms Cain’s plotting armoury:  yet another crazed killer is on the loose in Portland Oregon, despatching victims in new and hideous ways, and this time leaving not a single clue for Archie and his dedicated task force.  It becomes increasingly clear (especially as Gretchen sends him tantalising messages from the mental hospital where she is now incarcerated) that he will have to consult the fiendish Ms Lowell in a bid to find out more about the killer:  it takes one to know one, as they say.
Archie survives the meeting – just;  as the awful Gretchen was heavily drugged and restrained his physical health was not endangered, but oh, what about his head:  it was nearly done in!  Talk about fatal attraction – the old, dreadful chemistry is at work as always, and Archie must contend not only with that but also the determined advances of Susan Ward, irritating girl reporter, and a new and sizzlingly sexy occupant of his apartment building.  His problems with women appear to be endless – and baffling to the reader, because Ms Cain’s description of his physical appearance is less than kind:  one can only conclude, then, that his aftershave is irresistible.
Regardless, Gretchen’s information, supported by determined sleuthing from Ms Ward, moves the action along at a hectic rate.  Although she has unkindly characterised Portland as having more than its fair share of crazies, Ms Cain knows its topography well and is masterly at evoking atmosphere and suspense.  I defy anyone not to keep reading until they reach the end of this great page-turner, especially when Gretchen breaks out of the hospital, leaving a trail of corpses behind her (oh, she’s so resourceful!) and has one last, revealing meeting with Archie.  It has to be said that Ms Cain’s plotting is getting a little wild, but roll on, Book Six - I’ll be waiting!

The Night Season, by Chelsea Cain 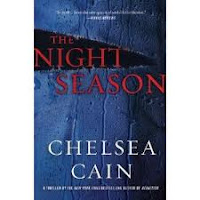 This is Ms Cain’s fourth novel in her Beauty Killer series.  It follows Evil at Heart, Sweetheart, and Heartsick, and one of her reviewers extols her as the new queen of serial-killer fiction.  That’s a fair comment.  In her first three novels she had all the necessary prerequisites of the genre:  blood and gore for Africa;  a crazed (but beautiful – gee, that’s a surprise!) FEMALE serial killer;  the brilliant but burnt-out detective who eventually captures her – but only after she has carved a heart on his chest and removed his spleen – (truly!),  and a plucky girl reporter with enough irritating habits to drive even the reader mad.  What more could one ask for in a thriller?  ‘The Night Season’ follows in the same vein, with the same characters , but evil Gretchen Lowell, the Beauty Killer of the other books plays a lesser role this time;  she was incarcerated for the second time at the end of book three and now sits in gaol refusing to talk, but the citizens of Portland, Oregon, must now contend with a new madman, as well as a huge, impending flood of the Willamette river caused by heavy rain and snowmelt that threatens to inundate huge areas of the city.  Oh, it’s all happening, especially as the new crazed killer poisons his victims in the most preposterously clever way, then disguises them as drowning victims.  It’s up to Archie the carved-up, burnt-out – but brilliant – sleuth and fearless girl reporter Susan Ward to track him down and reel him in.  (Sorry about that, but there is a lot of water in this novel!)  And they do, but not without a lot of heart-stopping suspense in between:  Ms Cain sets her scenes superbly;  she creates effortlessly the lowering atmosphere of a flooding city and the creeping dread of yet another killing just round the corner:  the reader cannot put the book down until the end, and there can be no more satisfying experience than to have to keep reading to see What Happens Next.  All the elements of good thriller writing have been satisfied in this series :  horror, black humour and psychological tension.  As one reviewer said:  ‘This time she adds another arrow to her narrative quiver:  the interplay between landscape and mood …. Terrifying. ‘  Wish I’d thought of that, but he’s absolutely spot on!

Now that we have reached the end of the year, it is customary for all the famous publications to publish their ‘Ten Best’ lists.  I refuse to be outdone!  Eat your hearts out, Time magazine and NYTimes - the Horowhenua Library trust can have a ‘Best Books of the Year’ list, too, so there.  For all those very kind readers who have accessed this Blog from faraway countries and would like to know where we are, just GoogleEarth to find the Horowhenua, which is a province in the lower North Island of New Zealand – there, see, I’ve made things easy for you – and you’ll eventually end up in Levin, deep in sheep and cow country, where our library and its treasures (including me) reside.
Now for the list:

Sorry, everyone – I could not confine myself to just ten selections, for every one of these books deserves to be singled out for very special mention.  It’s a chronological list:  for my usual long-winded review scroll older posts for the titles that appeal.
I’m adding some photos of our lovely region and various flora and fauna (apart from the cows and sheep!) for overseas readers – I’m sure GoogleEarth won’t be half as arty-farty in showing us off – and on behalf of the Horowhenua Library Trust and the management and staff of our beautiful Te Takere Library and Community Centre, I wish you all a wonderful Festive Season and a most happy and healthy New Year.

Didn't I tell you there were cows?  The mighty Tararua Ranges are in the background.