‘You can choose your friends, but you can’t choose your family’.  How true, especially for Georgia ‘Sweet’ Kirkendall.  She is overloaded with family and its attendant responsibilities when this story opens:  she is the reluctant caregiver to her husband Terry’s stepgrandfather (Terry wouldn’t dream of putting any relative of his in a home, despite the burden that it unfairly places on Sweet’s shoulders);  her own father has gone to jail for harbouring illegal Mexican workers on his Oklahoma farm – then refuses to accept bail:  he has principles he wishes to uphold, for the Mexicans were good people and hard workers, and they didn’t deserve to be deported, let alone beaten up so badly that one of them (a pregnant woman) died.  He will stay in jail as a protest.  Which would be all well and good, if grandpa hadn’t left behind his grandson, Dustin Lee, second child of Sweet’s dead sister Gaylene.  Dustin is now a reluctant lodger with Aunt Sweet ‘just until Grandpa comes home, hon’ – but Dustin is starting to despair.  Aunt Sweet’s son Carl Albert is twice his size, hates Dustin with a bully’s fervour, and works tirelessly at making his young life a misery.  Dustin needs to visit his grandpa in jail to tell him to come home – to stop his protest so that their lives can get back to normal, and to worry about principles another day.
Sadly, this does not happen:  the situation escalates from bad to worse, with the revelation that Sweet’s niece, Dustin’s half-sister Misty Dawn (the first of Gaylene’s ‘mistakes’) is hiding her Mexican husband who was deported, but sneaked back so that he could be with his little family again.  Misty Dawn needs – and expects – Sweet’s help in keeping him hidden, for there is a new law going through the books, introduced by an ambitious local counsellor that sends anyone assisting ‘illegals’ to jail.  Sweet is in between a rock and a hard place but the family ties that bind are made of indestructible material, and she does her best for the fugitives even though she seethes with resentment and loathing, mainly directed towards her feckless dead sister – always leaving everyone else to clean up her mess!
While Sweet is trying to solve one problem, another major one occurs with the disappearance of Dustin;  he has decided it’s time to go on the run, and poor Sweet’s life, whilst not entirely satisfactory before, now becomes a nightmare, not just of events, but of choices:  where do her strongest loyalties lie?  With her father, or her disgruntled bigot of a husband, who is raising his son to be a carbon copy, or to her dead sister’s children, Misty Dawn and Dustin Lee, each with their own terrible, poignant dependence on her to make everything right for them:  where to turn?  What to do?
Sweet’s decisions are the meat on the bones of this very fine book.  She is a singular heroine amongst characters that are no less well-drawn, and the problems she deals with are situations that can be recognised universally:  bigotry, familial love, betrayal, racism, responsibility, and attempts, always, to do the Right Thing.
I hesitate to use that hoary old cliché ‘heartwarming’ when describing this lovely story, but it is a tale that does warm our hearts – and our souls.  Highly recommended. 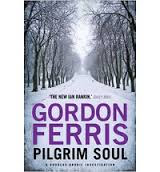 Douglas Brodie, Gordon Ferris’s Scottish war hero and protagonist of two previous books , (see review of ‘The Hanging Shed’ below) rejoins us for his third adventure, this time as a reluctant Glasgow private investigator at the end of 1946, hired by a group of Jewish businessmen to track down the criminals who are burgling the homes of their families and friends.  The victims are all recent immigrants, barely surviving the unspeakable horrors of their treatment in the concentration camps;  they have very little to steal, but what is taken  with the jewellery and mementoes are the memories of their lives before the persecution and mass-murder;  all the happiness and stability and respect they enjoyed in a civilised society before Hitler and his sadists permanently stained Germany’s good name with Jewish blood.  The Elders want these callous burglars caught:  their people have suffered enough.
To Brodie this will be an easy nut to crack:  there are enough clues left by the offenders to solve the case within a week – and he does, but discovers from his investigations that when you lift a rock, more than one nasty thing tries to scuttle off:  he soon finds himself on the trail of the ‘RattenLinien’, Rat Lines established by Nazi sympathisers throughout Europe to help Nazi criminals escape upcoming Allied War Crimes Trials in Germany, aiding them with  disguises and paperwork so that they could live new lives in the Americas.
Brodie is outraged.  He was present with the British Army when they liberated Belsen:  he has witnessed sights so dreadful that his life has changed forever and his sleep is riven with nightmares.  His faith in his fellow man is utterly destroyed, and the thought that these cowards, these beasts have an escape route is anathema to him.  They must be caught and brought to Justice;  they must pay for their crimes with their lives, sentenced by a Military Court in accordance with international  law.
Unfortunately, some people have other ideas.  The fleeing Nazis, holed up in Glasgow with their flimsy disguises by a temporary glitch in the escape route, are also being pursued by the Irgun Zvai Leumi, a Jewish terrorist organisation bent on three things:  the eviction by any means (including murder) of British Peacekeeping troops from Palestine;  the establishment of the State of Israel;  and the capture of Nazi criminals and sympathisers so that they can be returned to Israel to face Israeli justice.
Brodie’s excellent detective work pays off when he discovers Die Ratten’s hiding places, but his bid to bring them to the authorities is foiled by the ultimate betrayal, and to find out WHO, you will have to read the whole gripping story.  Mr Ferris has created a great anti-hero in Brodie;  he has many faults, cynicism and heavy drinking being just two;  he comes from humble origins and has a poor man’s disrespect of the upper classes; but his sense of honour is unshakeable, and despite his baser instincts, he always comes down on the side of right.  Add to that a brilliant evocation of Post-war Britain, rationing and a winter so awful that the reader digs out the parka and balaclava so that the blood doesn’t freeze in the veins before the book is finished, and you have a crime novel that’s first-class.  Highly recommended.

The year is 1946:  Scottish Douglas Brodie is a decorated soldier;  he has fought a hard war and has distinguished himself by bravery on the field.  The trouble is Civvy Street – his Demob clothing doesn’t fit, nor does the reality of postwar London adjust to his expectations.  He is a lost man, trying to sublimate into peacetime all the aggression and hatred that necessarily sustained him for six years, and he is fighting a losing battle – until he receives a phone call from a childhood friend, a friend who betrayed him when they were teenagers by stealing the love of Douglas’s life.  Brodie has never forgotten or forgiven Donovan’s treachery;  therefore it is beyond shocking to hear from a man who is begging for his help – for Donovan is in a Glasgow jail, charged and found guilty of murder, and due to hang in a month’s time ,unless Brodie can magic up a miracle on his behalf, because he is innocent -  innocent of the heinous, unforgivable crime of child rape and murder, even though the evidence is ‘incontrovertible’.
Donovan’s war has been cruel – he was the rear gunner on a bomber that was blown up by the Luftwaffe;  he survived but wishes he hadn’t:  his injuries have made him into a nightmare figure, and the resultant pain has turned him into a junkie.  He doesn’t care if he dies, but he does care that people know that he couldn’t, WOULDN’T commit the crime of which he is accused.
In his pre-war life, Brodie was a Detective with the Glasgow Police Force;  he is ideally qualified to delve into the evidence both real and manufactured that he is presented with by Donovan’s despairing lawyer:  the question is, does he want to do this favour for his old nemesis?  He loathes Donovan for calling on the far-off memories of staunch childhood friendship, and loathes himself more for not being able to put past treachery behind him.
Unfortunately as the story progresses, Mr Ferris allows his story to get away from him like a stampeding horse;  plot twists vary from unbelievable to bizarre to say the least – the villains are so awful they are almost comic-book caricatures, but he is a wonderfully acute observer of his fellow man, and I defy anyone not to recognise thee and me in the utterly authentic characters he creates.  He can set a scene with the best of them and generate enough action to make me feel that I shall be doing a disservice to myself if I don’t check out his other titles.  So many books, so little time!