The New Countess, by Fay Weldon 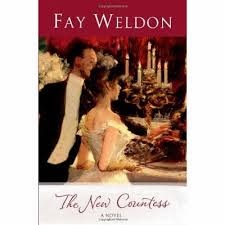 This is the third book in Ms Weldon’s historical trilogy of early twentieth century manners and mores, (see review below) and what a delight it is, charmingly written yet effectively skewering the hypocrisy and double standards of the age in every chapter, particularly with regard to the plight of women at all levels of society.
Much has happened but little has changed since Chicago heiress Minnie O’Brien wed Viscount Arthur Hedleigh, eldest son of Lord and Lady Dilberne.  It is now 1905;  Minnie has dutifully produced two boys – the heir and the spare – and whilst she loves her husband and sons dearly, chafes at the boredom of being Her Ladyship.  Arthur has his head perpetually buried in the innards of the Jehu, the car he has constructed (with her money) and hopes to produce;  he has time for nothing else and is impervious to Minnie’s unhappiness at having her decisions regarding the upbringing of her little sons ignored.  The boys are cared for by his old Nanny, who should have  retired years ago but has been brought back into service by the Countess, Arthur’s mother who trusts every decision the old harridan makes.  As  Minnie’s concerns are regarded as American nonsense, the situation is ripe for disaster.
Enter Rosina, Arthur’s younger sister, intelligent ‘but without charm’, a round peg in a square hole, who rushed off to Australia with an immensely rich (but common) Australian sheep farmer, there to endure extremes of heat and cold and a life utterly alien to that which she had previously been accustomed – exactly what she craved until she was tragically and unexpectedly widowed:  now she has returned, independently wealthy and full of dreadful feminist ideas – not only that, but she has written a book about the sexual customs of the Aboriginals, due to be published any day.
For pity’s sake!  Will this girl never cease creating tidal waves in polite society?  The Dilbernes are appalled, particularly as King Edward VII has expressed a wish to visit their country estate for a week’s shooting in December, four months away, accompanied by Mrs Alice Keppel, his mistress – and her husband, for forms sake.  Lady Dilberne is suitably outraged:  forced to welcome That Woman as her equal in her drawing room;  forced to turn a blind eye to ‘sleeping arrangements’;  and spend tens of thousands of pounds bringing Dilberne Court into the Modern Era – not just new furnishings but electric light, hot running water, and flushing toilets:  she is seething with resentment at the social injustice of it all.  Life has suddenly become enormously difficult for the Countess.
Therefore, she regards as tiresome the fact that Minnie has fled to London to stay with Rosina after finding Arthur in a compromising position with a lissom stranger:  Minnie is a whiner, thinks the Countess,  and needs to grow a thick skin.  Men always have mistresses, but it is their wives ‘whom they respect’.  Perhaps, but the Countess has a lot to learn.  She has not bargained on Minnie’s resourcefulness in her attempts to see her children and retrieve them from the clutches of their ancestral family and the awful Nanny, nor did she expect to have Minnie’s Irish mother creating a dreadful scene on the steps of their Belgravia home, the common Irish harpie – oh, it is all too awful to contemplate.
Ms Weldon’s sparkling prose effortlessly takes the reader back more than a hundred years to the birth of feminism, engendered of necessity by a man’s complete control of his wife’s wealth (Minnie is shocked to learn that she, a rich heiress, has no money:  Arthur’s family has it all.), his control over her education;  (no need for that – she’s there to run home and family) and most insulting of all, refusal to allow women the vote.
‘The New Countess’ is a smart, funny book – and a pitiless view of the way society functioned all those years ago.  And as to What the Servants Knew:  well, as usual they knew everything -  and didn’t hesitate to discuss it.  Highly recommended.

This is the second volume of Ms Weldon’s ‘Love and Inheritance’ trilogy, following ‘Habits of the House’ and once again, the reader is in for a treat as they follow the fortunes of the aristocratic Dilberne family, recently rejuvenated financially by the arranged marriage between son and heir to the Earldom, Arthur, and Minnie, a very rich but ‘low-born’ young Chicago heiress.
The old queen has recently died and all of London is agog at the arrangements for the impending coronation of Edward VII, formerly Bertie, Prince of Wales, the gambler and profligate now a Monarch determined to prove to his nation and government that he can rule with wisdom, power and dignity:  his ministers and courtiers are eager to assist him in that regard, but the pomp and ceremony demanded by him are making big dents in the public purse and any objections are met with the assertion that the Empire ‘expects a good show’, so a good show must be arranged.
Isabel, Countess of Dilberne expects to make a good show of her family and is gratified to know that she and her rich daughter-in-law Minnie will walk behind Queen Alexandra in the Abbey procession – her social standing can rise no higher – until by a series of misadventures, three extra seat invitations to the Abbey are lost, first sent by her to the Earl’s feuding, hateful younger brother Edwin, a parson in Somerset, then irretrievable when the rectory is burnt to the ground  a couple of days later.  Even worse, she and her husband are expected to take into the family fold the only survivor of the conflagration, Adela, 15 year old daughter of Edwin, an act of charity too hard for the Earl who flatly refuses to have contact with anyone connected with Edwin.  Fortunately or not, Adela disappears and is thought to have committed suicide, causing her reluctant relatives to heave sighs of pity and relief:  they no longer feel an obligation through blood – no matter how odious – to be responsible for her:  they can devote their considerable energies to Coronation etiquette, costumes and who is permitted by rank to wear more inches of ermine than others – and who will be sitting where, and next to whom, because the vexed question of the missing invitations has still not been answered.
Ms Weldon enjoys herself thoroughly – as does the reader – guiding her characters through the perilous waters of English society high and low, and there is no more shrewd observer of the double standards that prevailed at the beginning of the twentieth century (as illustrated so ably in ‘Habits of the House’), and no writer who could intersperse her fictional characters with the real-life luminaries of the time more successfully.
Ms Weldon writes in elegant prose of the great new ideas of the thinkers and  literary titans of the day;  George Bernard Shaw, H.G. Wells, Arthur Balfour, Ford Madox Ford, and that lone, formidable female Beatrice Webb, champion of women’s rights, creating such sparkling dialogue between them and their enormously wealthy society patrons that the reader is utterly convinced that Ms Weldon was actually present whilst great plans were hatched.
This is a vastly entertaining trilogy:  I was sorry to come to the end of both books and as before, am looking forward to reading the next episode – and sad that it will be the last.  Ms Weldon doesn’t always hit the jackpot with me, but with this charming series, all the bells are ringing!  Highly recommended.

The Phoenix Song, by John Sinclair.

When I was a child my father was an ardent communist, embracing that philosophy with all the zeal of the admirer from afar.  In fact, he was so enthralled by the concept of equality for all and the death of Capitalism that I was named after a Russian lady my parents met on a ship that called into Auckland during the war, and my elder sister was named after a fearless communist revolutionary, murdered in Berlin in 1918:  our humble origins transformed by lofty names!
All things Soviet inspired him but he particularly admired Mao Zse Dong, and as we grew up my sister and I were browbeaten daily with endless examples of Mao’s pearls of wisdom.  We were exhorted to read ‘Soviet Union’ and ‘China Reconstructs’ - surely an awful exercise in boredom for anyone, let alone children – but it was unthinkable to  refuse:  we ploughed obediently through that propaganda, eyes rolling like religious martyrs but miraculously suffering no lasting damage to our ability to form our own opinions.
Imagine the nostalgia I felt when I read ‘The Phoenix Song’:  there were all the old fiery propaganda speeches, the same slavish, unquestioning belief in the new God of China Chairman Mao and his magical ability to solve China’s vast problems with rousing speeches and exhortations to take a ‘Great Leap Forward’.
The communist struggle is told by Xiao Magou, born in Harbin in 1942 and the daughter of one of Mao’s companions on the Long March, Comrade Lu, and a young medical student fostered by two refugees.  White Russian Jewish musicians Piroshka and Kasimir provide an island of love and security for Magou and her mother in anarchical times;  they tutor Magou in the violin and soon realise they are teaching a prodigy, and there begins the climb to fame for Magou as the face of the new China, a symbol of its rebirth, both musical and intellectual and a glorious example of the great communist ideal.  Until she is told, because of her fluency in Russian, to spy on her Russian tutors at the Shanghai Conservatory.
Magou reports faithfully everything she hears to her superiors, including the fact that the Russians are well aware that tens of millions have starved executing Mao’s grandiose plans for the Great Leap Forward:  the seeds are sown for her own disillusionment and rebellion, especially when her loyal parents are disgraced and excoriated as ‘rightists’.  Defection is inevitable.
Mr Sinclair is an elegant writer.  In the first half of the book He recounts with fast-paced verve and stark lucidity the tumultuous events of communist China’s beginnings;  his characters, particularly Magou’s loving music tutors, are beautifully drawn, and his knowledge and expression of music is breathtaking.  BUT.
I wish there wasn’t a but, but there is:  the story seems to get away from Mr Sinclair in the last third of the book;  Magou becomes no more than a colourless narrator of her own life and her defection – and destruction of her prized violin, given to her by her tutors – is the weakest part of the story.  The reader is also asked to accept that Magou, a virtuoso musician, never plays again after escaping communist clutches and ending up in New Zealand.  It was definitely a bridge too far for me, and about as believable as one of The Great Helmsman’s speeches.  What a disappointment, for in this reader’s humble opinion Mr Sinclair is a writer of great skill.  Perhaps in his next book he will exercise his talents for the entire story, not two thirds of it.