LAST GREAT READS FOR MARCH, 2014
The Last Days of the National Costume, by Anne Kennedy

Auckland city, 1998.  A huge power outage has occurred, shutting off electricity to thousands of residents, and bringing Auckland to the unwelcome attention of the world:  ‘I mean to say, what modern first-world city on the planet blacks out its entire CBD?  And for weeks on end?’
GoGo Sligo (yes, I know;  awful, isn’t it,  but there is an explanation for Megan’s ghastly nickname – I just don’t know why the author stayed with it.) and her husband Art (Arthur) Frome live in the inner city, in a grace-and-favour villa provided by his wealthy parents.  He is a PHD student nearing completion of his dissertation and GoGo, a university drop-out, occupies herself with a small business, repairing and embroidering various garments for private customers and designers.  Their life is comfortably secure and pleasant, not least because every month a cheque arrives from Art’s grandmother the family matriarch, ensuring that living on the smell of an oily rag is both unseemly and unnecessary.
Life is good, pre power-outage:  GoGo’s business is humming along well enough, and because she works with her hands, she allows her mind free-range speculation about her clientele:  ‘Blouse, cream silk, torn front placket’ translates into ‘Desperate hurry, sex.’  ‘Jacket, man’s sports, navy, cigarette burn’ becomes ‘Late night, yacht club, gazing at woman.’  ‘Blazer, school, torn front panel’ is ‘Boy, innocent.’  And so on.  She is almost always right, for GoGo’s customers usually end up confiding in her – her honest face?  The calming atmosphere of her little workroom?  Who can say, but GoGo takes a certain mordant pleasure in her powers of deduction, and when an Irish national costume is brought in with a ripped shoulder seam by a punky woman who could hardly be described as the owner of the costume, GoGo is suitably intrigued.  The customer has no information about the costume which is obviously old, an heirloom that needs extensive repair to restore it to its former glory, but GoGo takes on the job, certain that she will ferret out its mysteries sooner or later.
The mysteries reveal themselves all too soon:  she is visited first by a business man who wants to collect the repaired costume, and while he is there his wife also arrives, demanding to know if GoGo has had an Irish national costume in for repair:  it is an heirloom for her daughter and she saw a person of her husband’s acquaintance wearing it in the supermarket!  For reasons inexplicable to her GoGo denies she has the costume and doesn’t reveal the presence of the woman’s husband in her workroom:  she is now complicit in Punk and Businessman’s deception and morally no better than they who practised the deceit.
And things don’t improve:  the inner city power outage occurs, knee-capping her business (sewing machines can’t work without power);  she lies to the businessman, telling him that the costume is not ready because she hopes at first that he will confide (as they always do) in her about his adulterous relationship – she makes him return several times with the promise that it will be ready – and confess he does, but he tells her his family history, his Irish childhood in Belfast – and completely ensnares her mind and her heart, until GoGo is a Gone Goose.  (Well, what a stupid name.  Anyone called GoGo deserves everything she gets.)
Anne Kennedy has given us a story of very uneven quality.  GoGo is a charming, gossipy narrator, witty and sharply observant of everyone’s foibles but her own;  however, I found her reasons for delaying the return of the costume entirely unconvincing – certainly insufficient on which to hang the plot.  Conversely, her client’s narrative of his Belfast childhood and the family’s reasons for leaving were gripping heart-in-the-mouth stuff, and her account (all true) of a big city without electricity is first class.
GoGo’s husband Art, privileged young scion of the squattocracy is absent for large parts of the story, despite the importance to the plot of his family’s eventual fall from wealth and grace.  For Ms Kennedy’s story to succeed on all levels he should have been given the spotlight he deserved:  he is a character just as fallible as GoGo and the businessman, but more likeable.
It is a shame that such a good plot has so many glaring inconsistencies.  If Ms Kennedy’s characters had been more credible (GoGo:  give me a break!!) this good novel would have been much, much better.

By Blood we Live, by Glen Duncan 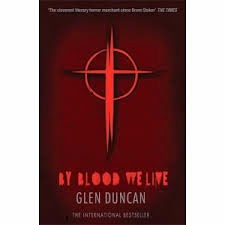 With his first two novels in this trilogy, ‘The Last Werewolf’ and ‘Talulla Rising’ (see July 2012 review below) Glen Duncan raised the bar for all aspiring horror writers:  no-one does bloody and gory better than he, nor do his characters enjoy themselves more as they rip and chomp their way through hapless humans with mindless delight – there ain’t nothin’ like it, especially as feeding on humans is vital to their existence.  By Blood We Live:  there is no other way.
Unfortunately, humans are starting to resent being torn to pieces at full moon, and they are even less enthused at being drained of blood by vampires every three days.  (Vampires have a withering contempt for werewolves; they regard them as merely part-timers, not serious in their vocation.)  Yes, humans are starting to strike back in the form of the Militi Christi, the Soldiers of Christ, an organisation funded by the Catholic Church and bent on exterminating with silver bullets and wooden stakes every monster it can lay its hands on.
Needless to say, this is nothing new – monsters have been fair game for hundreds of years, hunted by various arbiters of good versus evil – but this time the Militi Christi (thought by uncharitable monsters to be formed by the church to take the heat off all the accusations of child abuse)  seem to have vast numbers and superior intelligence-gathering that the werewolves in particular find baffling and devastating, especially when they are felled by silver bullets.
It is time for werewolves and vampires to unite in a common cause:  survival.
Remshi, the oldest vampire in existence (20,000 years and bowing under the weight of all that ‘life’ experience) is looking for werewolf Talulla Demetriou, not only to form a future alliance, but because he is convinced that she is the reincarnation of one of his lovers from long ago;  his great and only love, despite feeling enormous affection for his ward Justine, an abused young prostitute he rescued from the streets.
As with the first two books, the action never flags, and Mr Duncan rubs the reader’s nose in all the sins of the world;  there is no escape from human degradation – in fact, the monsters come off, if not squeaky clean (how could they, butchers all?) but a lot more honest and free from hypocrisy in their lifestyle.
Having said that, I still found the continuous action, the ‘search and destroy at all costs’ to be overkill:  Mr Duncan’s enormous intellectual skill and delight in presenting his monsters as the good guys is intriguing, though hardly unusual in the ‘bonk and bite’ genre;  despite his wonderful, anarchic characters and their predicament, there will be an all-out war:  will evil prevail?  And who are evil -  the monsters or the Soldiers of God?  WHAT is evil?  Mr Duncan asks all these questions, but provides no satisfactory answers.  Regardless, he has produced yet again an enormously entertaining  book, perhaps not an ideal end to his trilogy, but commendable and highly readable.  You be the judge.

I have been waiting for Glen Duncan to write his sequel to ‘The last Werewolf’ for what seems like ages, but It wasn’t, really :  he has turned out #2 in record time because (he says in a very funny interview in the NYTimes) that he needs the money – presumably to keep the wolf from his door (sorry, sorry!) -  and fair enough, as long as the quality of writing doesn’t suffer.  Well, I’m happy to report that all is well in Mr. Duncan’s anarchic and bloodthirsty world of monsters big and small.  He brings a refreshing literary talent to the relatively new ‘bonk and bite’ book style – there are so many of them these days that very few break the bounds of boring predictability:  Duncan’s 9 foot killing machines and smelly vampires are a breath of fresh air (if it wasn’t so laden with blood) in what is fast becoming a very tired genre.
Jake Marlowe, The eponymous Last Werewolf, was killed at the end of the first book;  unbeknownst to him, his lover Talulla Demetriou manages to survive the attack that ends his 200 year-old existence – and she is pregnant with his twins.  She is helped to hide from countless enemies by Cloquet, a former enemy and perennial loser who becomes her helpmeet and staunch ‘minder’;  she gives his life the sense of purpose it has always lacked – after all, it’s a big job to find a suitable victim for slaughter every month when the moon rises.  Not everyone can do it!
Unfortunately for Talulla, word of her pregnancy has reached some very unsavoury (and smelly) ears:  it is believed by a certain cult of vampires that the consumption of a werewolf baby at a certain time of the year will give them the ability to march around in daylight, instead of dissolving into an odiferous puddle of ash as soon as the sun hits them.  Talulla is a marked woman/werewolf, captured and completely disabled by the nasties as she is giving birth and forced to watch helplessly as the vampires make off with her little son. Luckily (depending on which way you look at it) the kidnappers were unaware – as was she! – that another child was on its way:  Talulla’s little girl is spared the same fate as her twin.
Thereafter begins a mad pursuit through Europe to try to track down Talulla’s enemies before they destroy her child, and on the way she encounters to her utter astonishment other werewolves,  all new -  it seems Jake was a little careless in his ‘relations’ with a certain prostitute, who in turn managed to infect several other people:  Werewolves rule, Dude!
Mr. Duncan’s plotting is bombproof:  in case the reader wonders where our hairy heroine gets the money to charge around the planet recruiting allies and helpers, well, Jake left her his considerable fortune, amassed over two hundred years, for a start.  No matter how many times I looked for a ‘Yeah, right!’ slipup I never found one;  the action never flags and some great new characters have been added to the mix.  I’m happy to say that this is that rare thing:  a sequel that packs just as much punch as the first, and is just as engaging.  And Glen Duncan can’t end things there because (by his own admission) he needs the money!  All to the good, I say.  Highly recommended.