The Hanging Club, by Tony Parsons 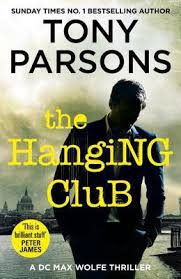 How satisfying, how enjoyable it is to be hooked by a story on the very first page – it doesn’t happen very often, especially with crime writers who follow a by-the-numbers formula, but Tony Parson’s swashbuckling superhero DC Max Wolfe, despite his superior and unerring powers of deduction has a human side which makes him much more credible:  his personal life in each book so far (this is the third) is less than ideal, except for his love for his little daughter Scout, and their dog Stan.  Max has been a solo Dad for several years now, and while he wishes, as everyone does, for True Love (he has fallen for a different girl in each story – unsuccessfully!) he still blesses life with his little family.
Not everyone is so lucky, especially the victims of the latest mindless violence he has to deal with every day:  a decent man remonstrates with louts who are urinating on his wife’s car parked outside their home.  The louts beat him to death, film it on their phones, then get the charges reduced to manslaughter in court – ‘he was freatening us, me Lord! It was self-defence!’ – despite the iphone evidence, their sentences are a slap on the wrist, leaving yet another family permanently in ruins.  Max feels a burning hatred for the smirking murderers in the dock, especially when they laugh at him, the arresting officer, on their way to prison.  Sometimes – many times, the Law is an Ass.
And another group thinks so, too – a masked group who post online their execution by hanging of taxi driver Mahmud Irani in a place so secret that no police at West End Central, Max’s base, has any idea where it could be – except that Mahmud’s body is dumped at the site of the old Tyburn Tree, London’s infamous place of Execution.  The video states that he was found guilty of grooming, drugging and abusing children, but the sentence he served (two years) was absurd:  death by hanging was the proper verdict.
This killing is followed up by another ‘execution’, in the same secret place of a trust fund manager who drove his Porsche over a child biking across a zebra crossing, sending the little boy into a coma for six months before he was taken off life-support, but Money-Man was sent down for two years only – another ‘wet bus ticket’ slap – and he was even reinstated in his job when he was released!
Once again, his death is posted online for all to see, and the internet is buzzing with support for the vigilantes who are doing what should have been done to those murdering bastards in the first place:  Bring Back Capital Punishment!
And those weak-kneed coppers who tiptoe around guarding the prisoners’ rights – they’re worse than the lot of them!  As Max finds to his horror when he puts two and two together and finds himself in the same secret place, awaiting his execution.
Mr Parsons keeps the action barrelling along at Porsche speed, at the same time giving readers a marvellous picture of another country within Britain:  London, that great and sprawling city, from the teeming centres of Smithfield and Soho to the elegant leafy avenues and squares of those rich enough to live there – and a compelling portrait of London’s underbelly, a place that no-one wants to explore.  FIVE STARS

End of Watch, by Stephen King.

‘End of Watch’ brings to a close Stephen King’s masterly trilogy starting with ‘Mr Mercedes’ (see 2014 review below), bringing together an unlikely band of protagonists to fight Brady Hartsfield, the Suicide Killer, grown more powerful than ever despite brain damage that permanently disabled him – almost.

Retired detective Bill Hodges (first name Kermit, unused for obvious reasons) runs a successful private investigation agency with Holly Gibney, a damaged and fragile person who hasn’t had the best of starts in life but has a gift for detection and computer talents matched only by Jerome (gone to Harvard), the last of the trio to bring down Brady Hartsfield.   Bill occasionally pays visits to the Brain Injury ward to see Brady, despite Holly and Jerome’s disapproval;  he can’t resist taunting and deriding the drooling wreck propped up in a chair so that he can see the riveting view of the car park from his window.  It feels good to heap scorn and hatred on a monster that had planned the death of more than a thousand young kids, thwarted at the last moment by Holly’s near-mortal blow to his head with a sock full of ball bearings.  Yes, Bill savours every moment of every visit, until Holly and Jerome finally persuade him that his gloating is turning him into a person they don’t like.  He’s better than that, so leave the monster alone.
So Bill’s hospital visits cease.  He still pays certain nurses to inform him of any changes or improvements in Brady’s behaviour – until he finds himself caught up in the medical system again, this time with results of hospital tests revealing the awful diagnosis of Pancreatic cancer.  As if that weren’t bad enough, disturbing things are occurring in the Brain Injury ward:  there have been several staff suicides, and an elderly hospital volunteer and the very specialist monitoring Brady are exhibiting worrying, out-of-character behaviour.  Bill’s subsequent digging reveals that everyone who died has been given a little computer game as a gift to while away free time, but his suspicions about the hypnotic effects of the little device are not confirmed until Jerome’s sister is given one in the Mall – and is rescued from throwing herself under a truck.
All roads point once again to the wreck in the wheelchair:  how could someone so grievously, permanently injured mastermind (for he has!) a plan to hypnotise hundreds of kids, recipients of the little devices, into removing themselves from the planet?  The Suicide Killer is back with a vengeance, and Bill, Holly and Jerome once again are in a race against time to prevent more deaths.  And Bill is racing against the terrible symptoms of his last illness, hoping to defeat for good the true monster that Brady Hartfield has become.
I could warble on (and often do!) of Mr King’s prowess at sweeping us all along with him on his heart-stopping, page-turning journey through each story, but in this trilogy his doughty band of heroes will stay in my mind far longer than old Monsta Brady:  it is the End of Watch for K. William Hodges (Det.Ret.) but his decency, kindness and honour illuminate every page.  Holly, that damaged girl who can’t be touched and can’t meet a person’s gaze stands up to be counted time and again;  and Jerome, who ultimately saves the day is a true babe!  Great characters, great story – FIVE STARS 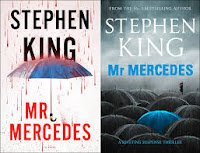 Former Detective K. William Hodges is nearing the end of his tether.  Since he retired from the city Police Force, life has lost its edge;  there is nothing meaningful to relieve the boredom of his days, most of which are spent watching inane TV shows, eating junk food and drinking too much.
Some days are worse than others:  on those days he contemplates suicide and sits in front of his TV with his father’s gun by his side – until the day he gets a letter, purportedly from a man who mowed down a line of jobseekers in a stolen Mercedes, a case that was still unsolved when he retired.
The letter writer seems to know a lot about Bill Hodges, including details of his first name (Kermit); information about his farewell bash (it was a drunken riot of fun!); and even more chilling:  insider knowledge of Bill’s suicidal thoughts.  Is this monster a mind-reader?  How does he know so much?
The general tenor of the letter is designed to increase Bill’s feelings of worthlessness, to push him into that last act with his father’s gun:  ‘it would be too bad if you started thinking your whole career had been a waste of time because the fellow who killed all those Innocent People ‘slipped through your fingers’.
But you are thinking of it, aren’t you?  I would like to close with one final thought from ‘the one that got away’.  That thought is:
F--- YOU, LOSER.
Just kidding!
Very truly yours,
THE MERCEDES KILLER.’

Once again, Mr King takes the reader into the dark places of minds and hearts with his usual effortless skill.  In this latest opus there is nary a hint of the supernatural for which he is so famous; not a spectre in sight:  instead he writes of the monsters that contemporary society creates who walk among their unsuspecting victims disguised by spurious normality -  as here, where the Mercedes killer is revealed early in the plot as Brady Hartfield, dutiful son of an alcoholic mother and hard worker at two jobs, one as a computer technician, the other driving an ice cream van.  What could be more normal; (even a little sad – the sacrifices that boy makes for his mother!) he works super hard at blending in with everything and everyone – why, he’s practically invisible!
But not infallible.  Contrary to his expectations, his letter has given K. William Hodges (Det.Ret.) a huge boost;  the depressive clouds have parted – his mind, always keen, has something to grapple with again:  start playing the game, Mr Mercedes.  Let’s see who wins!
As always, Mr King provides his main protagonists with great supporting characters, in this case Jerome, Bill’s 17 year old lawn and odd job boy – who just happens to be black, highly intelligent and a computer whizz – but not half as whizzy as Holly, a true PC Maestro who unfortunately is plagued with ‘issues’.  They are Bill’s doughty assistants.  Their dialogue is perfect, crackling and comic (how I wish I could remember some of those one liners!) but it never distracts us from the horror and creeping suspense of a great story.  Mr Mercedes is going to strike again.  But where?  When?  And can they stop him?
Stephen King has once again held a mirror up to contemporary society, and it shows a chilling image, one that is very hard to look at.  FIVE STARS