Ove is fifty-nine years old and a grump.  A curmudgeon (that quaint old term that describes so many muttering, dissatisfied old men to a T), and as far as he’s concerned he has a lot to be grumpy about – the state of today’s ‘modern’ Sweden, for instance:  don’t tell him it’s not going to the dogs:  why, absolutely everything these days is run by men in White Shirts, bureaucrats without an ounce of humanity in them except a love for their Rules and Regulations.  Overseas interests have taken over Swedish companies whose superior craftsmanship was always a source of quiet pride for all, and Ove in particular.  Take car manufacturer Saab for example:  Ove swore by Saabs all his adult life, changing models every two years – but only for another Saab.  Now the AMERICANS have taken over Saab (this occurred  thirteen years ago, actually) and Ove was so incensed that he has driven the same model ever since, the last of the Saabs to be proudly manufactured in Sweden.  It will last him till he dies.
And Ove wants to die as soon as possible, for it is six months since his beloved wife Sonja’s death from cancer.  Everything they shared together is over;  nothing is important to him any more without her support – even his rants about Men in White Shirts were tempered by her loving tolerance.  His life is meaningless to him now, and he wants to end it.
His first attempt at suicide by hanging is foiled by a rope that snaps (blankety-blank imported rubbish!) and a visit from his new neighbours, a young couple with two little girls and a third one on the way.  Patrick is an IT consultant, a confession which earns a glance of withering scorn from Ove, especially when Patrick shows his lamentable lack of skill at backing a trailer (Ove’s mailbox will never be the same again), and Parveneh is Iranian and too pregnant to devote time to anything else but her family – and once she realises Ove’s intentions, to preventing him from Doing the Deed.
For Ove, despite his irascibility and scorn for all things foreign is a kind and honourable man, a man with an innate desire always to Do the Right Thing, a man who will always battle the White-Shirted Bureaucrats on behalf of those unable to do so themselves – in short, a rough diamond;  a friend and neighbour worth having.  Even a particularly mangy stray cat thinks so too, and moves into Ove’s life and home as though it were his right.
So.  Ove has to capitulate.  Life has become too full of people needing his help to think of making an early exit from this world, and that is something that Ove has always been very good at:  helping.  Sonja would be thrilled.
Fredrick Backman has written us a beautiful little story, gentle and funny and encompassing life-changing events which in their very ordinariness have a huge impact:  loneliness;  grief and loss;  inability to keep up with changing times and trends – all of which can be counterbalanced by community support, neighbourliness, friendship and familial love.  FIVE STARS 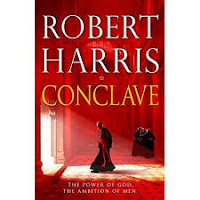 ‘Conclave.  From the Latin con clavis:  ‘with a key.’ ‘  and the term for the meeting of Cardinals, the Princes of the Catholic church gathered together to elect a new Pope.

It is hard to imagine that such an event could provide the basis of a thriller, but Robert Harris has done just that:  his latest novel cannot be described any other way, for it is as suspenseful and shocking – particularly at the end, as it should be – as any thriller worthy of the name.
Mr Harris sets his plot in Rome a few years hence:  the Holy Father has died of a heart attack and, after the pomp and magnificence of his funeral obsequies have been completed, it is time to convene all those eligible to select his successor.  Papal tradition must be observed at all times:  when the cardinals are locked in the Sistine Chapel to vote they do so in absolute secrecy;  their voting papers and any notes they make are burnt when they leave the chapel in the evening.  A Papal Election must to be seen to be utterly scrupulous and above reproach, one hundred and twenty of Catholicism’s finest advocates voting according to God’s wishes.
Except that as the hours wear on, it becomes clear that there are men of ambition hiding behind piety and humility – Jacobo Lomeli, Dean of the College of Cardinals and Convenor of each increasingly tense meeting in the Sistine Chapel is appalled to discover that the whole process is just as riven with factions, innuendo and scandal as any secular election.  He is a good man – and an honest one as he admits that the late Holy Father would not accept his resignation from office ‘because we need managers’.  He feels slighted.  Surely his religious career of more than fifty years has elevated him into higher realms than a ‘manager’.  Nevertheless, he decides to make the best possible job of ‘managing’ the selection of the next Pope, but is not above allowing himself a cynical smirk as he reviews the front-running candidates:
The current Camerlengo (Chamberlain) of the Holy See, Cardinal Joseph Tremblay, a French-Canadian very conscious of his film-star looks and perfectly coiffed silvery hair;  Cardinal Joshua Ayedemi, a mighty Nigerian with a powerful physique and a bass-baritone voice to match, and the African continent’s great hope to be the first black Pope, and Lomeli’s own personal preference, Cardinal Aldo Bellini, Secretary of State.  Lomeli prays fervently that the right man will be chosen for the huge task of leading the Church and more than a billion Catholics with courage and honesty, but as voting progresses and stalemates occur it becomes plain that God is not going to make the choice easy for the 118 cardinals.
An added complication is the late arrival of a mysterious Filipino cardinal appointed secretly by the late Pope:  Cardinal Vincent Benitez, Archbishop of Baghdad is unknown to everyone, but his credentials are impeccable;  he has as much right to vote – and be considered for Pontiff – as every other man in the room.  It appears that the Late Holy Father is controlling events even beyond the grave, especially when Lomeli starts reluctantly investigating scandalous rumours connected to various candidates and is horrified at what he finds:  the love of God comes a poor second to the love of power.
Mr Harris  propelled me at lightning speed through the twists and turns of his masterly plot;  the grandeur of St Peter’s, great bastion of Christendom has never been more eloquently portrayed and his characters are all too recognisable for the men they are, rather than the paragons they desire to be.  FIVE STARS

I Am Pilgrim, by Terry Hayes

Mr Hayes’s debut novel was first published in 2013, so you can consider this an oldie, easily accessible in our library – I heard about it from a dear friend who raced through it, and is still thinking about it weeks later.  Could any book have a higher recommendation:  word-of-mouth is still the best publicity.  My only regret is that someone didn’t word-of-mouth me aaaages ago;  I am feeling pretty ashamed of my ignorance up until now of this great thriller but – better late than never, so there!
Mr Hayes has had a stellar career as a journalist and screenwriter;  now he has turned his hand to The Big One, that which every aspiring writer dreams of:  The Novel.  And what a mighty job he has done;  his story is huge in every way, upwards of 900 pages (you’ll have to have strong wrists!), mighty in scope and bursting with characters so colourful and some so deadly that readers will feel that they have been smacked around the ears on every page.  And, in light of events in today’s unhappy world, Mr Hayes’s plot is entirely topical.
Scott Murdoch is a retired intelligence agent.  He is not a happy man;  his work (some of it necessarily violent and fatal to enemies of the U.S.A.) has burnt him out and he has settled in Paris in his attempts to bring normalcy to his life.  He is the adopted son of a very rich couple who have since died – his adoptive father loved him, but his ‘mum’ didn’t;  regardless, he can still live comfortably and pretend to be ordinary.  Until a New York Police Lieutenant finds out where he lives and pays him a visit – even though Scott has put up multi-firewalls of names and disguises in his efforts to remain anonymous, this man has FOUND HIM.
And he has been found because a few years before, he wrote a book under a pseudonym (naturally) about criminal behaviour, the various crimes he had encountered, and how they had been solved.  Now, the police lieutenant informs him, it appears that his little book has been used as a textbook to aid in the execution of an insoluble murder.  Scott’s expertise is required back in New York.  ASAP.
Meantime, a parallel life is being lived:  a teenage boy’s father, a marine biologist, is publically executed in Jeddah, Saudi Arabia for criticising the Royal family – a capital offence.  The boy and his family become outcasts and are forced to live in Bahrain, where they are not known.  The boy, now fifteen, is head of his family as is the Muslim way, and he is deeply shocked and furious when he discovers that his mother has taken a job, and no longer wears the veil.  His local mosque sends him off the Afghanistan to fight the Soviets;  his grief and fury solidify into a burning hatred for all things Western, especially as the Westerners prop up the corrupt Saudi Royals:  as the Saracen he will plot a fitting revenge against the Sauds;  he will exterminate them!  Until he meets a woman who tells him to concentrate on ‘The Far Enemy’, the United States, for they are the supporter of the Near Enemy, Saudi Arabia.
A terrible, ingenious plan is born – vengeance of the worst, the sweetest kind, and all sanctioned by Allah, Praised be His Name.


The plot is predictable only in that it is inevitable that Scott and the Saracen must meet, but how Mr Hayes gets us there is a tribute to his great gift as a master storyteller:  at no time does the reader feel that the action overtakes realism and logic, for so much has happened in the world since this book was published (and there’s going to be a movie, too!) that Scott’s adventures seem not the stuff of legend, but hard, cold fact.  FIVE STARS.
at 19:47