Acclaimed Canadian author Margaret Atwood is following in the footsteps of other eminent contemporary authors commissioned by the Hogarth Press to write modern versions of Shakespeare’s timeless plays.  So far the standard has been dauntingly high:  I read ‘Vinegar Girl’ by Ann Tyler with great pleasure (see review below)and was convinced no other writer, talented as they are, could emulate it – until now.
Ms Atwood’s play-within-a-play has every Shakespearean requirement:  magic;  villains most evil;  young love;  comedy – and revenge, the over-riding emotion and reason for being of ‘The Tempest’, now given a depressingly modern setting at the Fletcher County Correctional Institute somewhere in the Canadian province of Ontario.  Felix Phillips, once the avant-garde director and darling of the Makeshiweg Theatre Festival, has been usurped by his weasely assistant Tony Price, who has convinced the milksop Festival board to ‘let Felix go – he’s past his prime’.  Felix’s current upcoming production of ‘The Tempest’ is abandoned, as is his projected cast;  he is powerless to object, especially as he is escorted from the theatre by two bouncers courteously bearing all of his theatrical life in cardboard boxes.
The stage is beautifully set for revenge which – as per Will’s play – takes twelve years to materialise:  Felix has lost everything;  quite apart from his reputation, his beloved little daughter Miranda also died shortly before his humiliating exit from Makeshiweg.  He has much to brood on and finds a suitably lonely place in which to do it, not far from Fletcher Correctional, where (after learning that one of his enemies is now the Minister of Justice and the other the Heritage Minister) he eventually applies under an assumed name for a job teaching literacy and drama to the inmates.  He is a shoo-in for selection, especially as he is the only applicant and finds that after several productions – Julius Caesar, Macbeth, Richard III – he has had a degree of success unheard of in similar programs.  Crims are lining up to be in his next production.  Aye, The Play’s the Thing!  And what’s more, his two Most-Hated want to visit the prison to see the next play:  fortune is smiling on him at last.
And, with his choice of ‘The Tempest’ as the perfect vehicle with which to bring those MF*ckers down, Felix coaches his motley cast meticulously in theatrical artifice, constantly surprised by what his players teach him in return, especially his Ariel, a conman and computer hacker par excellence (he cooks up unlimited technological magic), his Caliban, a huge Afghanistan Vet with PTSD and addiction problems - ‘excellent actor, but touchy’ – the Hag-Seed of the title, and Felix’s original choice for Miranda when his star was in the ascendant:  Anne-Marie Greenland, then sixteen, a former child gymnast eager to act;  now an accomplished waitress – and still a great dancer and choreographer.  Well, she’ll have to be a fast mover to keep out of the way of his woman-starved cast.
Those two crooked Ministers haven’t a hope:  Felix’s faithful players follow all his directions to the letter (including rewriting some of their speeches in rap-talk and staging what the Ministers think is a murder and riot), and Ariel’s expertise with recording equipment exposes them cooking up more dastardly schemes, unaware that all their planning is being stored on a memory stick.
Ms Atwood gives all in her brilliant cast a happy ending, not to mention the feeling that the reader has at the end of this sublime adventure into theatre craft:  Shakespeare’s brilliance at harnessing every human emotion, good or evil, hilarious or sad shines again in Ms Atwood’s superb modern version.  SIX STARS!!

The Hogarth Press, originally established by Virginia Woolf and her husband Leonard, has approached internationally known and acclaimed authors to take part in the Hogarth Shakespeare project, the object being to produce modern versions of some of Shakespeare’s most famous works.  I am unsure if ‘Nutshell’, by Ian McEwan applies;  he doesn’t appear to be on the official list of writers – but he should be!  It is a delicious account of baby Hamlet in the womb, listening in horror as his mother and uncle discuss foolproof ways to murder his father so that they may inherit (instead of the Danish throne) a crumbling but hugely profitable mansion in Belgravia.  (See review below).

Who could possibly top that?  Well, no-one really, but Pulitzer Prize-winning author Anne Tyler has elected to tackle ‘The Taming of the Shrew’, the Bard’s paean to misogyny, and the bane of feminists – and ordinary women – since it was first written.  She does a sublime job.
Italy becomes the American state of Maryland, specifically Ms Tyler’s beloved Baltimore, the setting for most of her lovely stories.  Kate Batista is twenty-nine, a college dropout and reduced to keeping house for her largely absent father, a revered scientist researching autoimmune diseases, and her vacuous, empty-headed (but pretty and popular!) younger sister Bunny.  She knows that life is passing her by but she feels powerless to change her circumstances, until her father, desperate to keep his brilliant Russian research assistant whose visa is expiring, presents her with a request which she finds utterly outrageous:  marry Pyotr Cherbakov so that he can stay in the country and get a Green Card!  Her reward?  The knowledge that she has contributed to the unimpeded advance of vital scientific research!
Needless to say, Kate is furious – she is a shrew, after all, something that Pyotr in his clumsy attempts to court her recognises early.  Not that it deters him:  ‘You are crazy about me, I think’, he states when Kate’s body language (not to mention her mouth) informs him of just the opposite.  He does not care;  he needs his Green Card, and the thought of having to return to Russia without finishing the exciting work he is doing with the world’s foremost researcher on autoimmune diseases fills him with dismay.  Besides, there is nothing for him to go back to:  he was a foundling, left on the steps of an orphanage in a box that held cans of peaches (brand name Cherbakov).  No:  his life must continue here in the U.S.A, where he has a chance to permanently  belong to a community – and a family.
Ms Tyler was a finalist in last year’s Man Booker Prize (the first year it was opened to American writers) for her lovely novel ‘A Spool of Blue Thread’;  once again she beguiles the reader with prose as simple and natural as breathing, and she leaves no-one in doubt as to her mastery of Shakespeare’s comedic style, striking a blow (subtle though it has to be) for women everywhere with Kate’s wedding speech, in which she rationalises in the most charming, authoritative way Pyotr’s caveman tactics leading up to their hugely unceremonious marriage.
This is a little gem, and does the Hogarth Shakespeare Project proud.  SIX STARS! 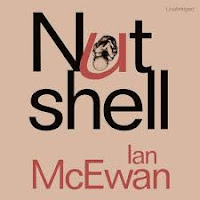 ‘So here I am, upside down in a woman.’  This is Ian McEwan’s unforgettable introduction to his masterly modern interpretation of Shakespeare’s ‘Hamlet’, specifically the murder of the King of Denmark by his brother Claudius and wife Gertrude.
Hamlet is still in his mother Trudy’s womb, and space is getting more limited by the day;  however, he is quite comfortable for the moment and takes a keen interest in the sounds around him, especially the radio interviews, lectures and podcasts he listens to (Trudy believes in keeping up with the play, globally speaking);  his only complaint about unborn life so far is that his soon-to-be father, publisher John Cairncross, has been evicted from the crumbling family home because mum is having a very carnal and energetic affair with John’s brother Claude.  The frequent battering ram assaults by Claude on various parts of his tender anatomy infuriate our little narrator;  he hopes that his silly mother will soon see the huge differences between the brothers before he sees the light – he is astonished that his kind, intellectually superior father has been supplanted by property-developer Claude, whose claims to sophistication and intelligence are negligible – but he does know how to choose a wine!
And a lot of wine is consumed, lulling the unborn to sleep most of the time, until he wakes up and hears a conversation which horrifies him:  Trudy and Claude have decided to remove John permanently from their lives by Murder Most Foul.  Because the decaying, filthy house in which Trudy lives (John and Claude’s childhood home) is in a very fashionable part of London, Claude knows that the site is worth millions, and because John is showing a marked and shameful reluctance to end his marriage (For Heaven’s sake, stop grovelling – where’s your self-respect!) there is only one solution:  he’ll have to go.  Claude intends to win Fair Lady and the loot.
Baby is agog at their duplicity, especially when it becomes painfully clear that he will not figure in their futures, but will be ‘put somewhere’.  To add insult to injury his own father appears to have no interest in his imminent birth either, intent as he is at abasing himself at the sandaled feet of his faithless wife.  What can he do?  What awful fate awaits him?


Mr McEwan’s book extends to just under two hundred pages, culminating with the birth of our fretting little narrator.  The author likes the idea of a novel that one can read in one or two sittings, ‘an intense experience’ – always assuming that it will entertain the reader sufficiently enough to do just that.  I have to admit that I have found some of his works to be of a much lesser quality than this one;  however, he has certainly achieved his objective with ‘Nutshell’.  His scintillating prose illustrates treachery, betrayal and murder in grand Shakespearean style and baby Hamlet’s family has never seemed more real.  FIVE STARS
at 18:40