A Column of Fire, by Ken Follett 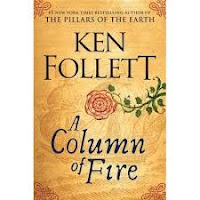 This is the third volume in Ken Follett’s action-packed history of his fictional town of Kingsbridge, founded in the middle ages by the monks who lived there to service the mighty cathedral they constructed. Now it is 1558 and Kingsbridge is prospering and largely Catholic under Queen Mary Tudor, who abolished Protestantism when she ascended the throne, in fact she was so zealous in her revenge against Protestants she has earned the unfortunate sobriquet of ‘Bloody Mary’. She doesn’t care: she has restored England to the True Religion.

The Willards and Fitzgeralds are the leading citizens of Kingsbridge: young Ned Willard hopes to make 16 year-old Margery Fitzgerald his bride, but her father and brother have more grandiose plans – if they marry her to the local Earl’s son, they will become related to the aristocracy. Marrying for love is laughable; everyone knows that marriages are alliances, meant to strengthen families religiously and politically. Ned doesn’t stand a chance, and removes himself from the cause of his sorrow by taking up a position as assistant to Sir Robert Cecil, the Protestant Princess Elizabeth’s adviser. He finds the intelligence work he is required to do an intriguing distraction to his personal troubles and in time comes to enjoy his employment – especially when Elizabeth becomes queen upon Mary’s premature death, and to every loyal Catholic’s horror, restores Protestantism as the rightful religion of England. For this great sin she is declared illegitimate and excommunicated by the Pope, and plans are immediately in train to put Mary Queen of Scots on the throne.

This tumultuous time of history in Mr Follett’s hands is like reading a superior thriller, especially when the machinations of the French court are revealed; Catholic Mary of Scotland must take the throne of England from the bastard Elizabeth (even though Mary has lived most of her life in France with her relatives, the powerful Dukes of Guise), thus consolidating the power of catholic Europe: Italy, France and Spain are rich and powerful enemies and little Protestant England is woefully outnumbered in every way. And it does no-one good to advertise their Protestant faith in those countries, as the St Bartholomew’s Day Massacre of thousands in Paris proves.

Mr Follett’s minor characters are well-realised and cover the bases for the action he imagines in Spain, France and the Netherlands: Ned’s brother Barney is a sea captain and gives a blow-by-blow account of the huge defeat of the Spanish Armada – and I have to say that normally, my eyes glaze after a while at detailed descriptions of antique weaponry and battle tactics, but Follett is such a great story teller that my eyes were glued, unglazed, to every page, which is no mean feat!

The story ends with the Gunpowder Plot by Guy Fawkes in 1606. Again, the event is written with heart-stopping suspense, not easy to sustain because everyone knows the outcome and this is a 900 page doorstop of a book – at the very least you have to have strong wrists! – but, apart from some truly sloppy editing (Ned is a ‘dreamboat’ and Margery is ‘small and sexy’. Characters say OK every now and then, too. For Heaven’s sake, I don’t expect the prose to be heavily Shakespearean, chockful of Prithees and How Nows, but GIVE ME A BREAK!!)

I am now wondering if Mr Follett will set his next story in the New World, for one of Ned’s grandsons is a Puritan and about to set sail on the Mayflower. Regardless of editing shortcomings, I am still enormously impressed by ‘A Column of Fire’. In Mr Follett’s capable hands, history is more than well served. It is the great adventure that it should be.