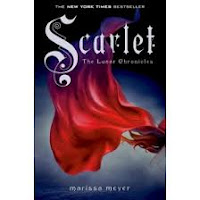 FINALLY! The sequel to Cinder - this time a completely different take on Little Red Riding Hood, and not before time, I say.

Ms Meyer’s sequel to ‘Cinder’, her fabulous, futuristic version of ‘Cinderella’ was so good that this reader found it a real chore to have to wait for Book two – and I’m grinding my teeth to think that Book three won’t be released until next year: couldn’t Ms Meyer speed things up a bit?

Cinder is in prison, having been captured at the the Prince’s ball – instead of leaving a slipper behind, she leaves her Cyborg foot! How’s that for a variation on the old tale? A? A? Sadly, the loss of her foot means that she was an easy catch and is now disabled in her cell – until a secret visit from professor Erland, a research scientist: he provides her with a new state-of-the-art hand and a top-of-the-range foot, enabling her to engineer (she’s a mechanic, remember) a daring escape from jail. And guess who he is? Yep, Ms Meyer’s version of Cinderella’s fairy Godmother.

She also takes with her another prisoner, Thorne, because he has a stolen spaceship hidden in a warehouse, and on their travels they link up with Scarlet Benoit, who has been looking for her beloved grandmother, kidnapped by a gang of wolves. Scarlet wears a red hoody, has a nasty temper and a reluctant attraction to a street fighter called – Wolf. Now. Who do you think she could be? And guess what happens to poor old Grandma imprisoned by the wolf gang in the bowels of the Paris Opera House, derelict and in ruins since the Fourth World War? (the Opera House, not Grandma!) Nothing good, that’s for sure.

As before, Ms Meyer has her readers in an iron grip and doesn’t relinquish them until the very last page: once again, the reader is screaming ‘but what happens NEXT! And once again, we’ll just have to wait and see. I’m sure all this suspense is hell on the digestion, but I’ll just have to tough it out. This is a great series.