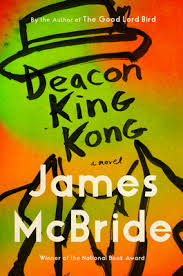 It is 1969 and Cuffy ‘Sportcoat’ Lambkin is a Deacon of Five Ends Baptist Church , but he has been a sinner for many years, being a slave to the Demon Drink called King Kong, a lethal home brew made by his friend Rufus, janitor in one of the enormous New York slum housing projects in which they both live.  That Badass King Kong makes him do awful things and then forget completely that he did them, so he reacts in shocked disbelief when he hears that he shot off the ear of the local drug dealer:  Sportcoat needs to go on the run – immediately:  when Deems Clements gets out of hospital, his revenge will be terrible.  And permanent.

James McBride’s latest novel brings to life superbly the New York of 50 years ago;  the migration of black people from other states into the already ramshackle housing projects vacated by the Jews, Irish and Italians, none of whom want to mix with Coloureds or Hispanics, and the hardscrabble life those outcasts made for themselves – even establishing their own church – until hard drugs appeared, and even worse, sold by their own people.  And sold by Deems Clements, who had been coached as a very young teenager by Sportcoat to be a baseball pitcher of enormous potential – a youngster who had a chance to leave his lowly origins through sheer talent, and what does he do?  Peddle Heroin in his neighbourhood, that’s what, selling poison for The Man.  No wonder the Deacon (heavily influenced by King Kong) shot him.  And he aimed for his head, too, but because he was so drunk he got Deems’s ear instead.

Mr McBride’s novel teems with wonderful characters, all full of life, including Potts, a sympathetic Irish policeman who is wistfully attracted to the noble and statuesque wife of the Church Pastor.  Sister Gee works as a cleaner:  ‘You an’ me, Officer.  We both clean up the dirt’. And Italian Tom Elefante (known as The Elephant – now there’s a surprise!), one of the few Italians still living in the area and working at his late father’s business of smuggling, but hugely respected because he won’t touch drugs.  But he’s 40 years old, and so lonely.  Will he ever find someone to care for?

A great veneer of exuberant humour has been employed to temper the horror and sadness of the characters’ existences, but it doesn’t disguise the fact that black lives have always mattered – and always will.  SIX STARS.