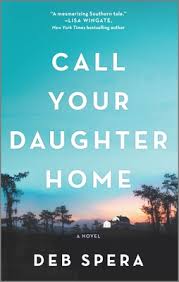 This is Deb Spera’s debut novel, though one would never tell from the accomplished ease with which she tells her lovely story, that of three very different women who are known to each other but live vastly different lives in Branchville, South Carolina in the 1920’s:  Anne Coles, educated, aristocratic – and rich, thanks to inherited money from her father, but in danger of losing it all because of the failure of the cotton crop, and her husband’s desperate venture into tobacco:  woman of colour Oretta Bootles, Anne’s renowned cook and lifelong nursemaid to Anne’s children.  Oretta and her beloved husband Odell had a daughter of their own who died of fever, as so many did at that time, but Oretta has the Sight, and hopes one day – knows one day that she and her darling will be reunited.  In the meantime, she battles on, holding the Cole’s lives together with her practicality and huge goodwill, for the Cole’s children have been blighted and damaged by life:  two daughters have left home, one son committed suicide, and the other two sons are in thrall to their tyrannical father.  It is not a happy home.

Enter Gertrude Pardee, in desperate need of employment:  she has heard from her brother that there is employment with Mrs Cole, and is desperate to find a home for herself and her four daughters, for her life with Alvin,  the drunken lout her daddy married her off to has grown unimaginably worse since he lost his regular job and moved them all out to a swamp hut owned by his brutal father:  it’s up to her to support them, because Alvin won’t – particularly now, after the latest beating, because Gertrude shot him with her Mama’s gun:  he ain’t gonna beat any of them, ever again.  Gertrude is on the run and hoping that the swamp alligators will enjoy Alvin for supper so that there is no evidence of her crime.  Which doesn’t stop her conscience prodding her something fierce, especially when she attends the local church.

And God hasn’t grown bored with these three singular women:  He still flings up barriers and issues impossible challenges in the shape of an early Depression and a terrible Diphtheria epidemic.  Loved ones will die and starvation will take up residence in Branchville, but all have their own ways of surviving, and it is inspiring to read how they do it.  Ms Spera based her wonderful characters on memories of her own family, and what a great family it was.  SIX STARS.