The Pull of the Stars, by Emma Donoghue. 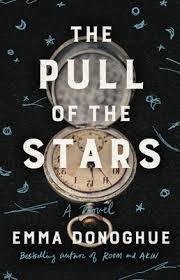 Influenza - ‘The Pull of the Stars’:  Italians believed that the influence of the constellations could indeed make them sick, and in November, 1918, the whole world is slave to Influenza.  As if an earth-shattering world war hadn’t caused enough suffering, the Flu, the Grippe – call it what you will, had invaded every home, especially those of the poor.

Emma Donoghue’s latest novel was started in November, 2018, the centenary of the disease that wiped out between 3 and 6% of the human race, and was rushed into print to coincide with the latest threat to humanity:  COVID 19.  It describes the events of just three days in the maternity/fever ward of a catholic hospital in Dublin, severely understaffed as more nurses and doctors succumb to the illness, leading to ‘promotions in the field’ of staffers who have previously kept strictly to their allotted tasks.  Such a worker is Nurse Julia Power, suddenly in charge of three patients, all of whom are infected, and all in danger of going into labour as a symptom of the disease.

The Night Nurse, a nun, arranges an assistant from the Mother House, a catholic orphanage just around the corner, and Bridie Murphy enters Julia’s life:  semi-literate, half-starved, and the owner of mysterious scars, she is still a breath of fresh, clean air in the ward, heartbreakingly willing to please, a natural nurse and the possessor of a memory that forgets nothing, good or bad:  together, she and Julia quickly weld themselves into an inseparable team – even the sadness Julia has waiting at home in the shape of her mute brother (wounded in the war, in his spirit.  He no longer talks.) can dim the satisfaction of a job well done.

Until Day Three dawns, and with it the re-arrest at the hospital of Dr Kathleen Lynn, a Sinn Feiner and dangerous rebel, released early to attend to the appalling numbers of flu sufferers;  her second incarceration coincides with new exhortations from the Government pasted on city walls:  EAT AN ONION A DAY.  LIE DOWN FOR A FORTNIGHT.  ‘WOULD THEY BE DEAD IF THEY’D STAYED IN BED?’ Julia is living in a nightmare which continues with no respite throughout the day:  young lives cease without warning – youth is no insurance against this disease, especially with poverty and malnutrition as a base:  the stars are pulling strongly indeed.

Ms Donoghue, acclaimed author of ‘Room’ and ‘Akin’ to name just two of her great stories, recreates superbly the terror and fear of a century ago when our world was held hostage to an unknown, all-powerful enemy, an illness that we didn’t know how to vanquish:  she draws the obvious parallels to the corona virus, but surely – surely – we can beat it this time around – can we? -  can’t we?  SIX STARS!!