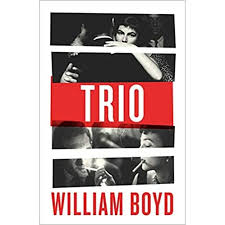 It is 1968, and a film crew assembles in the English seaside city of Brighton to start work on a film tentatively entitled ‘Emily Bracegirdle’s Ladder to the Moon’.  Producer Talbot Kydd has assembled an eclectic cast:  luminous, breathtaking new American star Anny Viklund in the title role, with latest pop sensation Troy Blaze as her love interest;  Rodrigo Tipton (‘Please stop calling me Reggie, Talbot,  I have changed my name, birth certificate, passport, everything:  Rodrigo is my NAME.’) will direct, and a host of former celebs will flesh out the minor roles.  All should be well.

In a perfect world.

Rodrigo/Reggie comes with baggage in the shape of his wife Elfrida Wing, a once-famous author who has suffered from writer’s block for ten years, and has turned to alcohol for inspiration and comfort:  whilst searching for her lost muse, she takes Brighton’s pubs by storm.

Beautiful new star Anny has problems, too:  her politically radical ex-husband Cornell Weekes has escaped from an American prison where he was incarcerated for trying to blow up an army base.  He is rumoured by the police and FBI to be attempting to come to England to contact her.  The movie does not need this kind of publicity, and as Producer, Talbot has a lot of troubleshooting to do.

Talbot Kydd is not a happy man, and his attempts to find solutions to insurmountable problems are chronicled with empathetic skill and the usual artistry we expect from William Boyd.  As always, he makes one sentence do the work of ten and, as always, leaves us wishing we could meet his characters again.  FIVE STARS.