Drawn Out, by Tom Scott.

Anyone who has read a newspaper or the Listener Magazine in New Zealand will be familiar with Tom Scott, brilliant satirist, cartoonist, playwright, writer and torturer of our politicians of all stripes.  No public figure escapes his close attention if they make the news and after he has laid them bare in caricature and prose, cannot be blamed for wanting to fade back into obscurity – sharpish.
Now he has written a ‘seriously funny’ memoir – not exactly bursting with malicious secrets guaranteed to bring down the government, but with plenty of inside goss on the great (and otherwise) events that he covered in his years as a political journalist, especially his time in parliament, and his legendary jousting with the late National ex-Prime Minister Robert Muldoon – who loathed Scott so much that he refused permission for him to accompany his party on its first official trip to China.  Not to be outdone, Tom Scott called in favours and, representing the Listener magazine, managed to accompany the entourage as far as India, much to Muldoon’s fury. The resultant articles plus cartoons did nothing to further endear him to the PM;  in fact he is famous for being ordered from a press conference by Muldoon as soon as the PM caught sight of him at the back of the room.  Tom Scott’s fame and reputation is well-earned, but Mr Muldoon’s loathing undoubtedly increased his X-factor. 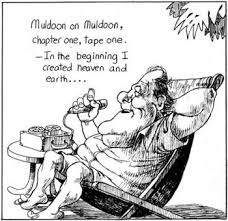 Scott’s parents were both Irish and he relates that a compelling reason for their marriage in England were the heavily persuasive powers of his mother Joan’s brothers when, discovering that Tom Scott Snr had impregnated their lovely sister (who had already given birth to twins Tom and Sue), they felt the need to convince the groom that it was in his best interests to come with them to the Registry Office to wed their sister.  They kindly helped him arrive – they had to, because they had beaten him so badly both his eyes were swollen shut.
It was an inauspicious start to a very unhappy union.  The family emigrated and settled eventually in Feilding in the lower North Island;  four more children followed Tom and Sue and dear old dad who was an alcoholic and proud of it, treated them all with varying degrees of neglect – especially his wife, who suffered his fists and his butcher’s knife tongue – but Tom was the special object of his contempt.  If he cried, which to his shame seemed to occur often, it was ‘Oh, get the Weeping Bowl, Egghead’s crying again!’  It is a tribute to the hidden reserves of strength and intellect he didn’t know how to use, plus artistic talent and the very gift of the gab from his cruel old dad that enabled Scott to get a good education and lay the groundwork for his future career:  naturally, we, his devoted readers, are counting our lucky stars that dear old dad didn’t drown Tom at a young age in the Weeping Bowl.  He certainly sounded tempted.  Regardless, Tom Junior made a good life for himself despite his father’s scathing disdain, and he entertains us all with his vast, unstinting reserves of humour and a matchless ability to entertain.
The book buckles eventually from all the celebrities listed in its pages, and an unforgivable editing sin is committed whereby another ex-PM Jim Bolger is quoted twice in different parts of the book as bragging about ‘the usual world leadership stuff.’ Very careless, but easy to forgive in the face of such quality entertainment.  FOUR STARS.