The Woman in the Woods, by John Connolly. 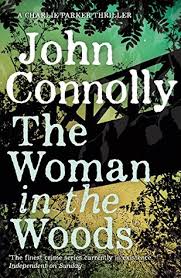 The body of a young woman is found in the Maine woods after a seemingly healthy tree toppled over and revealed her remains buried beneath.  From medical examination of the corpse it is known that the woman had died in childbirth, but there is no sign of the baby:  could the child have survived?  The local police have many questions, especially as the young woman seems to have been reverently laid to rest some considerable time ago;  she was not the victim of foul play.  But where is the child?

The child, five year old Daniel, lives not far from where his mother’s body has been found, and starts receiving disturbing calls from a scary voice on his toy telephone:  it wants him to join her in the woods because she is his mommy and she wants to see him.  And so his nightmares begin but – as always – Mr Connolly’s legions of fans await with breathless anticipation the arrival of Private Detective Charlie Parker, that Dark Prince of Justice in this world and the next, (and hired by a local lawyer)  to unravel the mystery.
He has many helpers along the way;  his cold-blooded-killer friends Angel and Louis for starters, though in this adventure Angel is battling cancer and his partner Louis cannot contemplate life without him – so he blows up a fancy pickup truck belonging to a local white supremacist (Louis is black) and, while it made him feel better temporarily it causes huge trouble for Charlie with the police he is meant to be assisting – not that they can prove anything, but still.  He is supposed to be on the Side of Right, not consorting with people who blow up Confederate flag-decorated pickup trucks.
Charlie’s life is complicated more when distressing links are made with several killings in other States, seemingly random until his investigations reveal that the victims were sadistically murdered because they were part of a network helping young women and children leave violent relationships, hiding them and passing them on to the next safe house at the right time.  It is now clear where the Woman in the Woods came from, but who was pursuing her, and what did she have that they wanted so badly they would leave a trail of bodies behind them to get it?
As always, John Connolly steers the reader unerringly through a plot complicated this time by a cast of thousands – or so it seems;  in fact there are so many minor players in this story that I backtracked in confusion several times, having forgotten who was who in relation to what etc. but hey!  That could also mean that I shouldn’t be reading so late at night;  my concentration becomes unreliable.  Never mind.  He is still a high quality writer and I look forward as always to the next unforgettable Charlie Parker thriller.  FOUR STARS