The Dirty South, by John Connolly. 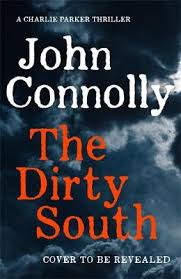 Private Detective Charlie Parker’s creator John Connolly has written a prequel set in 1997 to his famous and riveting series, starting just after the unspeakably sadistic murders of Parker’s wife and young daughter, and detailing the beginning of Parker’s search for their killer – and his overwhelming need for revenge.

Charlie’s resignation from the NYPD notwithstanding, he is still able to call in many favours from former colleagues in his search for cold cases that resemble in any way the gruesome methods used to dispatch his beloved family;  he will travel anywhere and employ any means possible to find parallels between unsolved murders and those of his loved ones: Charlie’s grief is raw and terrible, and retribution is the only fitting response.

To that end, he finds himself in Burdon County, Arkansas, an impoverished part of the state that is hoping for a big economic injection from a huge international firm thinking of establishing itself in either Arkansas or Texas, bringing prosperity and hundreds of jobs – and the ripple effect – to whichever state it chooses.  But lately, Burdon County has been plagued by a series of sadistic murders of young black girls, each killed by multiple stab wounds, and as a final indignity, impaled at either end of their bodies by branches.  And even worse, the local sheriff, member of the premier family of the county was seen kicking the corpse of the first victim onto private land.  It had originally been dumped on federal land, which meant that the FBI would have investigated, but private land denoted just a local investigation, ensuring that the crimes would stay ‘local’ and under the radar of the prospective international investor;  negative publicity of any kind being anathema to those who would make a huge profit from the deal’s success.

As always, the more Charlie finds out, the more secrets and corruption are exposed, not to mention the thriving business in methamphetamine in which all the local good ole boys are involved – but that’s a minor crime in the scheme of things as yet more bodies are discovered:  Burdon County has a terminal disease that Charlie can’t cure.

But he can find out its source, and does so with the aid of Angel and Louis, his two staunch friends who have his back, always.  And as always, Mr Connolly fills the book with wonderful characters, drawn with great detail and accuracy, and heart-stopping action that keep the pages turning well into the night.  And you’ll never guess whodunnit!  FIVE STARS.