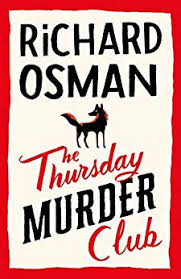 The Thursday Murder Club is Osman’s first, and so far, his best novel.  Well. You can’t say fairer than that.  And that statement alone will give readers a taste of what’s to come, all of which is a pure delight.  I’ve been wading through some pretty heavy stuff lately and it was an utter pleasure to sit back and enjoy that rare combination of excellent characters, a complex plot (you have to pay attention at all times!), and wonderful humour combined with shrewd observation on what to expect when we reach the wrong end of life.

The residents of Coopers Chase retirement village have reached that stage of their existence, but a number of them are refusing to throw in the towel just yet, and have formed The Thursday Murder Club, held on that day in the Jigsaw Puzzle room and organised by Elizabeth, Ibrahim and Ron, all of whom had very interesting occupations before Old Age caught up and galloped past them:  Elizabeth was something mysterious and high up in law enforcement (she has influential 'friends’ seemingly everywhere);  Ibrahim is a retired psychiatrist with a huge, not to say alarmingly pedantic grasp of facts and statistics, and Ron – Red Ron is a famous Union stirrer and battler of legendary repute, the bane of every British Prime Minister for the last forty years until arthritis and his short-term memory did for him.  They are still intent on using their combined formidable intelligence to solve a Cold Case, and have just recruited Joyce as a new member.

Joyce is practical, disarmingly cheerful and a prolific baker of excellent cakes – and she’s a nurse, providing necessary medical knowledge to the group – oh, they’re going to have great fun solving the cold-case murder of a young woman who died in the 70’s!

Except that not one, but two ‘fresh’ murders occur within days of each other:  first, the builder of the retirement village is bludgeoned to death in his home, then the developer for whom he worked is poisoned with a massive overdose of Fentanyl.  Never mind that the police are on the scene with alacrity – the Thursday Murder Club will provide invaluable assistance, not least because they live On the Job.  And it’s great to have mysteries to solve, for it makes them feel young.

Mr Osman successfully negotiates the fine line between pathos and bathos by treating his great characters with utter respect, and giving them – and the reader – myriad opportunities to laugh;  at themselves, at each other, and at life.  SIX STARS!