The Abstainer, by Ian McGuire. 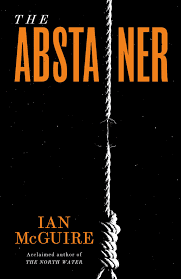 English author Ian McGuire has constructed a novel so justly weighted against the country of his birth that it would be easy to mistake him as being from the Emerald Isle;  his fictionalised account of the infamous hanging in November 1867 of three innocent Irishmen wrongly accused of the murder of a Manchester policeman weeks before is the precursor to the monumental battle that follows:  the retaliation by the Fenian Brotherhood’s efforts to take revenge against authority figures in Manchester, that filthy, teeming city that is home and slave work in the mills to a large and dirt-poor population of Irish, there because their own country cannot feed them.  Thanks to the English.  Manchester is the battleground for what is to come, a war to the death between two men, representing each side.

James O’Connor has been sent from Ireland to ‘advise’ the Manchester Police Force on the Fenians.  He had a career as a constable in Dublin until tragedy robbed him of his family and he took to the drink;  now, he is on his last warning and has become an Abstainer – and an Outsider with the Manchester constables, who treat him with ignore, or contempt.  Never friendliness.  Nevertheless, he has built up a good network of informers and learns that an assassin is coming over from New York to commit a retaliatory crime big enough to stop the English in their murdering, bombastic tracks.

Enter Stephen Doyle, a soldier who survived the American Civil War and found that the strategies, battles – and killing – is what he is good at:  warfare is his speciality and he does not expect to return to New York having failed at his mission.  But he reckons without the complication of James O’Connor being added to the equation, especially when Doyle dispatches one of the informers, O’Connor’s nephew.

What started as a routine assassination for Doyle, with various unfortunates being disposed of along the way, becomes a titanic struggle to the last breath against O’Connor, who has enough weights on his conscience without adding more family members to the list:  he needs to atone for his nephew’s brutal death.

Ian McGuire has written a singular historical novel that reads partly as a thriller, nailing us to every page, and a tragedy Shakespearian in its proportions.  His spare, beautiful prose makes one sentence do the work of ten.  ‘The Abstainer’ is a truly Great Read.  SIX STARS.