The One Hundred Years of Lenni and Margot, by Marianne Cronin. 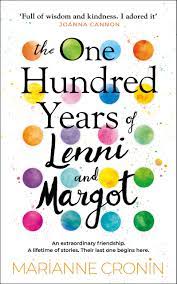 Lenni Eklund is seventeen years old and has a terminal disease.  She is a patient until her eventual death in a Glasgow hospital, and she’s not particularly happy about spending the remainder of her life there, or the lack of answers to the Big Questions, as in ‘Why am I dying?’, a question she poses to the resident hospital chaplain, Father Arthur.  He doesn’t have a Godly answer, but she likes the way his name rhymes with his occupation:  he, in turn, is flummoxed by Lenni:  ‘Because you are’ is not satisfactory, he knows this, but apart from sharing his sandwiches with her and eventually, his steadfast friendship in the too short time till his retirement, he can think of nothing else.

Until Lenni joins an Art class for people with long-term conditions and meets Margot, a tiny eighty-three year old Scottish lady with loads of artistic talent and a fascinating life story to tell – and who better to tell it to than Lenni, starved for life experiences that she will never enjoy or endure, but the ideal repository for all secrets and confidences – not because she will die soon and take the secrets to the grave, but because she is the best listener imaginable, remembering every detail, and frequently bringing her own  hilarious take on Margot’s life experiences, good and bad.  A great friendship is born and nurtured, and between them they produce a painting for each year of their lives, which add up to One Hundred Years, a whole century!  And for each painting they tell each other the story behind the painting and, tragic as some of the stories are,  they are made luminous and unforgettable by the deep and enduring affection Lenni and Margot have for each other, and their perfect understanding of what they have together.

This lovely story was always going to end in tears – how could it not, with the certain death of at least one of the unforgettable protagonists, but there’s no bathos or syrupy background violin music as Lenni eventually departs for pastures new;  thanks to Margot, Father Arthur and various other new-found friends from the Art class she has packed a century of life into her seventeen years.  She has lived.

It’s hard to believe that this singular book is Marianne Cronin’s debut novel;  her writing is wonderfully assured – who would have thought that the story of a terminally-ill teenager could be so enormously entertaining and funny, but it is a tribute to Ms Cronin’s writing talent and the strength of her characterisations that Lenni and Margot will stay with us for many years to come.  SIX STARS.