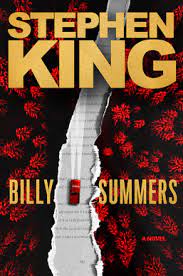 Prolific and acclaimed author Stephen King introduces us in his latest novel to a singular new protagonist, former Marine sniper turned hit-man Billy Summers.  Billy is used as often as needed by the Mob – he has an ‘agent’, Bucky Hanson, through which his work is vetted and his one proviso is that the target be a truly bad man.  Which must surely be an oxymoron of sorts, but Billy has a moral code made up of Marine honour, good and evil and a past life that explains everything.

Of late he has felt like retiring;  it’s time to hang up the weaponry and live normally if such a thing could be possible, but Bucky has offered him one last job that pays so much, he’d never have to work again at anything.  The target is an Asshole Extraordinaire who doesn’t deserve to live another  minute, much less all the time his crooked lawyer has managed to buy him.

Billy takes the job, which involves living in the community as a writer, an alias that turns out to be a very good way for Billy to blend in as an aspiring author attempting his first novel, all the while scoping out from his ‘office’ the Courthouse where the shooting will occur:  piece of cake!  Except for the Best-Laid Plans of Mice and Men etc etc:  Billy does the job and expects payment, only to find that his contractors aren’t going to pay, and they aren’t going to let him live, either.  He’s been stiffed.

It takes King a while to get to this point in the story;  in fact (dare I say it!) I was starting to wish he’d ratchet up the action, get things moving, when that’s exactly what happens:  Billy’s on the run;  he’s been forced to don another identity, including wearing a ridiculous disguise – but it works, and it buys him time in his new little hidey-hole to plan his next move.

Which is to pursue those who betrayed him, and find out who employed them, for whoever did so, is the most evil one of all, and must be removed from this earth like the disease that he is.  This world has no place for such bad men, and Billy intends to eliminate them all.  Needless to say, Billy has morphed into a hero of Biblical proportions, with the reader cheering him on every bloodstained step of the way and, as an added bonus, we are privy to Billy’s writing attempts in his guise of ‘author-to-be’.  It is no easy task to write a novel-within-a-novel but Stephen King’s storytelling skills are superlative:  unforgettable characters, great dialogue, superb action - when it gets going.  Piece of cake!  FIVE STARS.