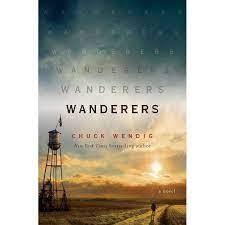 An apocalyptic novel forecasting the end – and possible rebirth – of a different  civilisation is not inappropriate for times such as these, when the world is fighting wars against disease, bigotry and fanaticism;  in fact, there is the inescapable ring of truth in Wendig’s huge (800 pages!), densely plotted novel which teems with characters and has subplots galore.  And I have to tell you that nothing becomes really clear until the very end, which means that you have to stick with it, so there!

But it’s worth it.

In early June a new comet, named Comet Sakamoto after its discoverer, passes over the United States, and a phenomenon coincidentally occurs:  certain people start walking, beginning with Nessie Stewart, a 15 year old girl who literally drops everything one morning at her home in Pennsylvania and starts walking – where?  Her elder sister Shana tries to stop her and is horrified that her attempts provoke a terrible physical response:  it is clear that her sister will literally die rather than stop walking.  In a very short time, Nessie is joined by other ‘walkers’, all silent, zombie-like and seemingly impervious to outside influences – they don’t need food, water or toilet-breaks:  they are in stasis till further notice.  The walkers are trailed by a band of loving, concerned relatives, and a team of scientists from the Centre for Disease Control, for surely this phenomenon must be an outbreak of a previously unknown pathogen?

In the meantime, a new disease has reared its ugly head in San Antonio, Texas:  a bat population disturbed by an explosion bites every human they find, and the resulting symptoms develop into a 100% contagious, fatal disease called White Mask, after the ghastly white mucus that runs from ears, eyes and noses.  It doesn’t take long before Southern Evangelicals start chanting about the End Times, and white supremacists begin blaming niggers, spics and slit-eyes for the breakdown of society – which, of course, was doing just that, well before comets and disease.  And it doesn’t take long before the Far Right start blaming the Walkers as well, for all of society’s ills:  it’s time for them to go, to be rubbed out!  After they’ve gone, Amurrica will be great again!

There are some great characters in this story – too many to list, but controlling everything is an Artificial Intelligence presence developed by one of the scientists called Black Swan:  he/she/it literally has the last word.

‘Wanderers’ is similar in theme and content to Stephen King’s ‘The Stand’ and Justin Cronin’s ‘The Passage’, but retains its originality and frightening message to the end:  start walking, world!  FIVE STARS