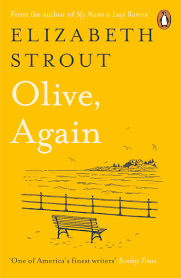 For the myriad devoted fans of Ms Strout’s superb Pulitzer Prize-winning ‘Olive Kitteridge’, Christmas will have come early as the last part of Olive’s life is revealed;  that irascible, tactless, forthright and singular woman is now in her 70’s – more by good luck than good management, she thinks, and she is amazed to find that Romance in the shape of wealthy widower Jack Kennison has entered her life:  is God playing a joke on her?

As always, Olive enjoys/endures a long-distance relationship with her only son Christopher, and finds his family wanting;   (for Heaven’s sake, Chris’s wife has two children by two different fathers, neither of whom married her!), a visit by the family to her home in Crosby, Maine is rather less than successful as a vehicle for meeting the new man in her life, Chris’s prospective stepfather, and it takes an exasperated, belittling lecture from Olive’s despised daughter-in-law to make Chris see reason, by pointing out that she had five children to look after, not four.  Nothing has changed for Chris:  he is still being bullied.   Chris is the ‘Needle in Olive’s Heart’.

Once again, Ms Strout expertly uses the same short-story format from the first book, introducing various townspeople as characters that Olive influences – or upsets, and they are fascinating as always, from the suddenly orphaned lawyer returning to Crosby after the family home is razed to the ground by a fire started by squatters, a fire that killed her father who lived as a recluse on the top floor:  it is not until she meets with his long-time lawyer to settle the estate that all the shameful family secrets emerge.

Or local pillars of the community Fergus and Ethel MacPherson:  he enjoys the annual re-enactment of Civil War Days in the local park, and wears a kilt sometimes in tribute to his Scottish ancestry.  Ethel works in the town hall issuing fishing licenses.  They have been married for forty-two years, but thirty-five of that number have been incommunicado, for Fergus had a fling way back in the day and has never been forgiven, or spoken to since – or divorced.  And   they both expect to live out their days in similar fashion, until their oldest daughter comes home on her annual holiday from New York City with the earth-shattering news that she is ‘starring’ in a documentary.  As a Dominatrix.  Because that is her profession.

Yes, life proceeds at sometimes breakneck pace in Crosby, Maine:  Olive has a major heart attack in her eighties and enters the last stage of her life in Assisted Living, concluding that ‘I do not have a clue who I have been.  Truthfully, I do not understand a thing’.   Anyone at the rear end of their life may feel the same, but Strout’s brilliant Olive embodies perfectly the person we wish we weren’t, and the person we wish we had become.  SIX STARS.