The Searcher, by Tana French. 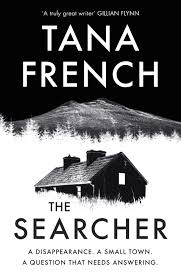 It’s always a pleasure to look forward to a new book by acclaimed Irish Novelist Tana French, and with ‘The Searcher’, as always, she lives up to her stellar reputation, combining mystery, suspense and starkly realistic characterisations to produce yet another story that leaves us regretful we have come to the end.

American ex-detective Cal Hooper has come to Ireland for a new start after a failed marriage and early retirement made him long for a release from his problems.  He bought acreage sight unseen (off the Internet – where else!) in Ardnakelty, about as far as one could get from Chicago, scene of all that he felt is wrong with his life:  now, he is employing building and carpentering skills that he thought he’d long forgotten, and he’s enjoying the novelty of village living – which involves searching questions about his origins from absolutely everybody.  No stone is left unturned in the quest for Knowledge Of Cal, and he finds that it’s useless to be offended by everyone’s nosiness – no offense is intended;  they all just want the craic because he’s a stranger who may stay on, or disappear after his first winter.

Fair enough, Cal thinks, and all is peaceful and predictable until a child turns up on his doorstep (after spying on him for a week) and announces that he wants to hire him to find the child’s 19 year-old brother Brendan.  Because Cal is an ex-cop and should know how to find him. Because the child knows that Brendan would never have left his family, a family that is regarded in the village as occupying the lowest rung of life socially and economically.  Something bad has happened to Brendan, and will Cal take on the job?

And for various reasons, Cal does decide to investigate, not least because there seems to be a strange reluctance by the locals to freely proffer information.  He finds he has to ask about Brendan in a very roundabout way, as though he were trying to find out about other people entirely, and as he proceeds deeper into his enquiries he finds that far from being a peaceful Sleepy Hollow where crime is barely awake, Ardnakelty has grim and violent undercurrents that reveal themselves all too readily if disturbed.

Ms French, once again, has introduced us to characters whom we are loath to leave;  they are completely convincing and their problems are instantly familiar, whether they live in a big city or a tiny dot of a village.  We know these people, and it would be great to meet them again.  SIX STARS.