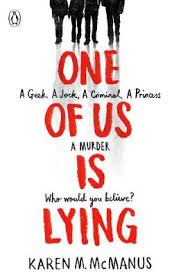 Five teenagers are in detention at Bayview High School, supposedly for trying to smuggle their mobiles into class, which is strictly forbidden.  They are a motley lot:  Bronwyn, over-achieving geek and scholar;  Addy, gorgeous home-coming princess, entirely under the thumb of her football star boyfriend;  Basketball sensation Cooper Clay;  Nate Macauley, class bad boy and local drug supplier; and Simon Kelleher, loathed and despised – and feared by everyone because he has an online gossip blog called About That which people can’t stay away from, for all the nasty outed secrets in it are true.

No-one knows where Simon gets his information from, but there have been life-changing repercussions from Simon’s cruel exposés, and some of his student victims haven’t made good recoveries from being the centre of his interest;  needless to say, his companions in detention wish they were anywhere but with him, especially on what they think is a trumped-up charge:  none of them would dream of bringing their phones into class.  Who would be so stupid?  But here they all are, watching Simon get a glass of tap water because he can’t find his water bottle, so. They’d better knuckle down until they’re allowed to go home, whenever that will be.  Until a massive distraction is heard in the parking lot outside:  two cars have collided head-on, causing everyone to rush to the window, and by the time they turn away from the side-show, Simon is stretched out on the floor, gasping for breath – he has always had a peanut allergy and has swallowed a cup of peanut oil instead of the water he expected to drink.

To make the nightmare events even worse, the epipen he usually carries cannot be found, nor can spare epipens that are always kept in the nurse’s office.  To everyone’s utter horror, Simon dies a short time later, despite the Paramedics’ best efforts.  And an even worse eventual discovery:  Simon’s next blog contained damning – and true – scandal about each of his detention mates, scandal that they never dreamt would see the light of day.  How did he know these things, secrets that nobody, nobody could be aware of?

Fate is playing fast and loose with them all and the situation gets even worse when the police start investigating, and deciding that each of the surviving four have enough reason to doctor Simon’s water with peanut oil, thus preventing him from exposing their shameful secrets.  How can they prove their innocence?

Ms McManus treats the reader to a real page-turner, fast-paced and smart, with an excellent twist in the tale that shows her familiarity and respect for teens everywhere.  There’s a sequel, too:   ‘One of Us is Next’.  Can’t wait!  FIVE STARS.