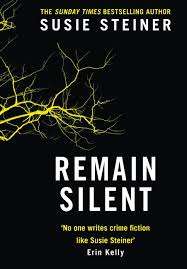 Lucky, lucky me:  this is the third book in Susie Steiner’s series about Detective Inspector Manon Bradshaw, and my only regret is that I had to come to the end.  Manon is almost eerily efficient, hotshot at all aspects of her job, but the opposite is true at home where chaos reigns supreme, despite her and her little family’s best efforts to impose order;  unfortunately, her toddler son Ted is a mini wrecking-ball, her loving partner Mark is not good at bloke things like repairing anything that breaks, and her beloved adopted son Fly is not the least bit interested in cramming for his all-important GCSEs.  Life, as usual, is gnarly.

And doesn’t improve with the discovery of a hanging body in woodland with a note pinned to his trousers, written in Lithuanian.  ‘The Dead Cannot Speak’.  The Hornet’s nest has been well and truly kicked when investigations reveal a filthy house, full of Baltic migrants who, lured to England with the promise of high wages and a better life, are trapped into working for twelve hours a day, every day, doing work no Englishman would dream of – for what?  They don’t see their wages, they have had to surrender their passports:  they are slaves.  And they are trapped.

Hanging victim Lukas Balsys is one of their number and his story is told in a series of flashbacks that recount both sides of the thorny Brexit problem:  no future in his own country versus cheap labour versus England for the English, and Manon, freshly returned from part-time work investigating cold cases, discovers a huge hidden network of criminal cruelty and exploitation – if only she can find the proof to bolster her suspicions.  And the more she and her officers investigate, the sadder the situation, especially when one of these slaves dies:  what happens to the bodies?  Where are the bodies?

There are also power struggles with the new DCI at work – DCI McBain-of-my-Life, who is more worried about job cuts, press releases and her own public image than results - unless they are reflective of her fine leadership:  Oh, the problems keep piling up – but Manon keeps grafting.  She is a hero for the ages, as so many women must be, for they have no choice in the matter.

These novels would make a great TV series – with Olivia Colman as Manon;  she’d play that brilliant, blowsy, straight-for-the-jugular, compassionate, loving woman to the hilt, as Manon deserves.  SIX STARS