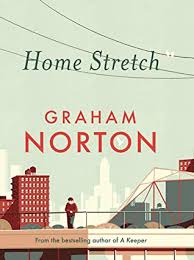 This is TV comedian and internationally popular presenter Graham Norton’s third novel, and in my opinion, his best so far. And he’s brave to touch on themes which have had an enormous effect on his own personal life as a gay man;  homosexual life in eighties Ireland, where the story starts, was very much a closeted affair and Norton writes from personal experience, having to leave the country to attain a normalcy for himself that he couldn’t find at home – as happens to one of his main protagonists, Connor Hayes.

It is Summer, 1987, and six young people from the village of Mullinmore are going to the beach.  One couple will be married the next day at the local church, and one of the other passengers is a bridesmaid;  her sister is also there  and jealous that she couldn’t be a bridesmaid, too.  The car is being driven by the local Doctor’s son who has brought along silent teenager Connor, the publican’s son (everyone wonders why)  - but before the day is over, tragedy strikes:  there is a terrible accident.  Three of the six die and one is paralysed,  and Connor is blamed, for he was driving.

Mullinmore will never be the same again.  The families of the victims must attend three funerals instead of the lovely wedding they had expected, and Connor, the architect of everyone’s misfortune, is shipped off to Liverpool and a building site where no-one knows his story;  he can start again, if he’s brave enough – and the attendant, awful secrets of that shattering day will remain his to bear for the rest of his life.

But time moves on:  secrets, however well-hidden, sometimes have a way of revealing themselves and Connor, gay and living in New York, is shocked to stumble onto a chance family connection, with repercussions that once again alter irrevocably his loved ones’ lives in Mullinmore.  Should he stay safe and anonymous in New York, or should he return home to ruthlessly expose everyone’s misconceptions?

Graham Norton guides Connor effortlessly to the right conclusion, causing us all to heave a massive sigh of relief.  He is an engaging and sensitive storyteller and his characters are your neighbours – albeit with an Irish accent!  And the humour leavens at all the right times the tragic elements of the novel, not just the accident but the longing for a proper identity, which is found at story’s end.  Great stuff.  FIVE STARS.