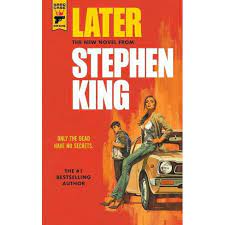 Jamie Conklin sees dead folk.  Not that he’s looking for them, you understand, but for some inexplicable reason they reveal themselves to him just after they have died - starting with his neighbour’s wife, standing in her nightie next to enormously distressed Professor Burkett, who is weeping in at the door to his apartment.  Jamie is six years old, but he can tell that he is the only one who can see Mrs Burkett, so he stays silent, letting his Mom comfort the poor man – even when Mrs Burkett says to Jamie ‘I bet he’ll ask that Dolores Magowan out to lunch now!’ Jamie still stays silent until the next time he sees a dead man at a traffic accident:  the man’s injuries are so terrible that Jamie can’t bear the horror of it, and finally tells his mom, even though he knows she will think he’s seriously ‘disturbed’ – maybe the same as his Uncle, mom’s brother, in a care facility with early-onset Alzheimer’s.

Naturally enough, mom doesn’t believe him at first, but her checking reveals certain irrefutable facts, enough of them for her to swear Jamie to secrecy about his ‘gift’ – no-one else must know about it, ever.  Fair enough;  as far as Jamie is concerned, it’s not something he can brag about, anyway.  His lips are sealed.

Until years later, when mom meets a woman who becomes more than a friend -  Liz Dutton, an NYPD detective who now takes up a lot of his mother’s time and attention.  Jamie isn’t sure what to think of this interloper who calls him ‘Champ’, which he dislikes – but she also buys him Matchbox cars for his collection and sometimes makes him laugh – which he loves.  He doesn’t know how he really feels about her until he finds out that mom has told Liz about his ‘gift’ and Liz wants to use him to speak to Thumper, a notorious supermarket bomber who, before committing suicide a couple of days ago swore he’d hidden another bomb, bigger than all the others and guaranteed to kill hundreds.  Unfortunately, Liz doesn’t want to find the bomb to save all those lives:  she wants to save her job because she’s that worst of people – a bent cop.

Stephen King takes us, as always, on another heart-stopping journey through supernatural highways and byways, scaring us all rigid, then using his inimitable humour to relieve the tension.  He is that most enviable of writers:  each new book feels like a yearly reunion with a treasured old friend.  FIVE STARS.