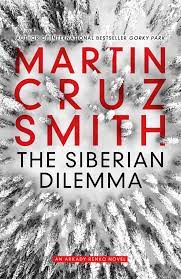 The Siberian Dilemma: if one is fatally unlucky and falls through thin ice on Lake Baikal (or any Siberian lake), does one drown beneath the surface, or scramble up through the hole – then freeze to death within minutes on the ice?  Either way, the outcome is the same.  Dire.

And being vulnerable to such an end is no surprise to Arkady Renko, Senior Investigator of Police in Moscow;  permanent sufferer of burn-out and world-weariness, but still oh-so-good-at-his-job and catcher of bad guys no matter how powerful they have become – or who in the Kremlin can protect them.  He is a thorn in the side of his hateful boss Zurin, but knows too much about him to be removed.  So Zurin does the next best thing:  Arkady will be despatched to Irkutsk, Siberia, to prosecute a Chechen terrorist on behalf of Zurin.  Said terrorist had made an attempt on Zurin’s life ‘so needs to be put away for a good long time’.  Arkady’s absence would also give Zurin some breathing space in which to pursue an affair with a Cuban ‘lady’ he has been lusting for.

Arkady is thrilled to be going to Siberia – what a stroke of luck, for Arkady’s great love, crusading journalist Tatiana Petrovna is doing an article there on Oligarchs, and is currently travelling with one, Anatoly Kuznetsov.

Arkady hasn’t heard from her, and the less he hears, the more he worries.  His ‘exile’ will be the perfect excuse to reassure himself that she is safe – and that she is still his, especially when he meets the Oligarch:  Kuznetsov is charismatic, brilliant and charming, and is thinking seriously of starting a political party in opposition to Putin.  Which makes him the ideal subject for Tatiana’s article – and a moving target of the Kremlin.  Tatiana refuses to acknowledge the danger:  this is the best story she will ever write!  And maybe the last, thinks Arkady who, in the short time he has been in Irkutsk has already worked out that the Chechen terrorist is exactly the opposite, and a sniper is taking shots at him.  Siberia isn’t the friendly destination it’s promoted to be.  What a surprise!

This is the ninth book in Martin Cruz Smith’s Arkady Renko series;  its quality of writing is as high as ever - as is the body count;  there are the usual beautifully drawn and engaging minor characters, and Arkady has a very droll line in self-deprecating humour.  He’s getting a bit long in the tooth now, but he’s still a lethal weapon.  FIVE STARS.