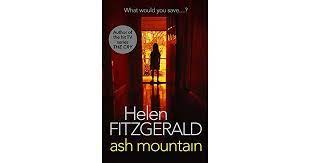 The tragic and terrible toll of the recent Australian Bush fires on the environment and population has never been more graphically depicted than in Helen Fitzgerald’s ‘Ash Mountain’, a deceptively slim volume telling a giant story that resonates unforgettably with all its readers.

The small inland town of Ash Mountain isn’t far from Melbourne, but Fran thought she had escaped it and its painful memories forever – until her beloved dad suffers a serious stoke and requires her return.  Her 16 year-old daughter Vonnie, whose father was Fran’s best friend (and everyone knows that sex with besties seldom works out) comes too – not because she wants to, but because she’s going through a rebellious stage, and she likes to ruffle as many town feathers as she can, starting with Australia Day.  Ha!  Everyone knows it’s really Invasion Day.  (Vonnie’s dad has aboriginal blood).

Fran has a much older son, Dante, product of Fran’s first sexual encounter at the age of 15;  he is currently residing as a Happy Hippy in Ash Mountain.  Raised by Fran’s dad, Dante is thrilled that his mum and little sister are having a stint in the old home town, even though the eventual outcome will be very sad, because Gramps is not expected to hang on for much longer.  Still, it’s great that everyone is back together again, even if it’s not permanent – why would it?  Fran is not surprised to see that nothing has changed – the Catholic church and its boarding school still holds sway;  each mass on Sunday is well-attended, thanks to the popularity of Father Frank (quickly imported to replace that Paedo Father Alfonso – what a scandal, say nothing and it’ll go away!);  her ex-schoolmates are still living in the same houses, still as vicious and catty as ever, even though they are now ‘respectable’ married women.  Yep, nothing has changed.  Fran doesn’t want her beloved dad to die, but the quicker he declines, the quicker she can leave, for the longer she stays, the more distressing secrets begin to reveal themselves, secrets she is not interested in and of which she is afraid.

On the plus side, there’s a whiff of romance in the air:  another neighbouring returnee, a widower with three daughters, has changed from being a teenage dickhead into a lovely man she would like to know better – until the bush fire starts.

Ms Fitzgerald’s stark, terrible prose flings us all into the fire:  there’s no escape for many of the town’s inhabitants who make the wrong decisions, gambling on outrunning the flames in their cars, or staying behind like Father Frank – not to help, but to try to destroy incriminating evidence.  (That was a spoiler, wasn’t it!).  But throughout the terrible suspense of who survives – and how – runs a priceless and necessary vein of humour to relieve the horror:  Fran is a champion at upsetting Father Frank;  she even steals a dollar from the collection plate and tells him in Confession – take that, you old hypocrite!  This is a stand-out book.  SIX STARS.