The Rose Code, by Kate Quinn. 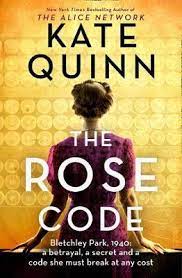 Best-selling American author Kate Quinn tries her hand here at a very British story:  the Bletchley Park code-breakers of the Second World War, that  dedicated band of talented and special people who saved countless lives with their skill at cracking ciphers and codes and by so doing, shortened the race to victory by at least two years.

Ms Quinn stumbles occasionally over everyday idiom – the British drive Motor cars, not automobiles; regardless, she still recreates very skilfully the everyday stress and fear that all had to endure daily, especially when the bombing started:  there is no respite from the terrible and ruinous tragedies suffered by Ms Quinn's excellent characters, all based on real people.

At the war’s beginning, three young women are recruited to work at Bletchley Park in Buckinghamshire.  They all have different reasons for working there:  Osla is a wealthy Canadian debutante who, thanks to her finishing school education, has an excellent command of the German language;  Mab (short for Mabel, but she doesn’t want anyone to know that; she wants to forget her East End origins) is nearly six feet tall and has nimble fingers.  She will be an excellent operator of the huge Bombe machines that spit out unintelligible data to be broken down by Enigma machines, used by the brilliant code-breakers, one of whom is a girl they recruited themselves – their overbearing landlady’s daughter, mousy, bullied Beth.  Beth has never been encouraged to believe that she will have any other kind of life except as her mother’s ‘little helper’.  Bletchley Park is her salvation, not least because of her genius for unravelling codes that she sees as rose petals, intricately layered until they are peeled back the right way.

A further complication arises in Osla’s life:  she is in love with Philip, Prince of Greece, but is informed by MI5 that because of his German connections (his beloved sisters are married to German nobility) and the oath of secrecy she has signed, she must cease contact.  Which she does, and it breaks her heart, especially when his engagement to Princess Elizabeth is eventually announced.  Mab meets the love of her life, only to lose him again in a bombing raid, and Beth is horribly betrayed by a traitor and incarcerated in an asylum.  Ms Quinn ramps up the pace to heart-stopping suspense here, dragging us by the nose through Mab’s tragedy and Beth’s efforts to escape her fate.  The three friends must depend entirely on each other to survive.

Ms Quinn’s exhaustively researched novel  expertly recreates the life and times of those heroes who stopped the German War Machine without leaving Bletchley Park.  It is a fitting tribute to their dedication.  FOUR STARS.