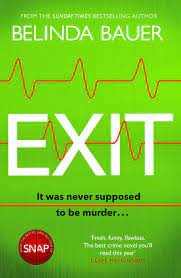 Felix Pink is a widower who lives a very quiet life with his rescue dog Mabel in a small Devon town.  He is a retired accountant and his days are orderly and structured – he would never say ‘boring’, but oh, how he wishes that his Margaret were still with him – in her right mind.  For his wife gradually succumbed to dementia, leaving him entirely alone in the world, their beloved son having died many years before from cancer in what should have been the prime of his life.  No-one knows the meaning of the word ‘solitary’ better than Felix, or the terrible, on-going grief he experiences on his weekly visits to the cemetery to replace the flowers on his loved ones’ grave.  He wonders how long it will be before he will join them permanently, but until that longed-for day arrives, he will try to live an upright, decent life, as Margaret would have wanted him to.

And to that end, he has joined a very discreet society called The Exiteers, a group of dedicated people who help people to end their lives – providing said people meet certain criteria:  they must be terminally ill, leave a Will and/or very clear instructions and be able to administer a dose of a certain gas (provided by the Exiteer) themselves;  the Exiteer will be there purely for moral support, and to ‘clean up’ the scene after death, so that a verdict of suicide is patently obvious in the Coroner’s Report.  Felix has ‘assisted’ at quite a number of deaths, and as the story opens, he is about to assist with a new recruit, a young woman who nervously reveals that this is her first time, and she decided to ‘join up’ because her Nan died a horrible, lingering death and she wants ‘to make amends’.

Fair enough.  Except that, unbeknownst to them the house they visit has not one, but two patients who appear to be terminal and, after the young woman botches things irretrievably with # 1, # 2 makes his presence known by querulously demanding from another bedroom ‘Was anyone going to get on with the job?’

Belinda Bauer has combined high tragedy with low comedy in this ruthless examination of the British version of the Swiss euthanasia clinics;  she examines the ‘system’ from every angle, including the corruption that is rife and so easily flourishes in the most unlikely sections of society – until decent, boring (yes, boring, Felix!) people take a stand.  Great characters, great story, FIVE STARS.