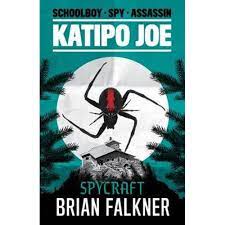 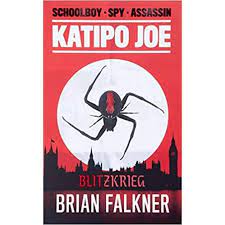 Brian Falkner’s wonderful wartime adventure series opens in Berlin in 1938:  Hitler is massing his troops and Germany is preparing for the Thousand-Year Reich and a pure Aryan race.  Joseph St. George is 12 years old and living in Berlin, the son of British Diplomats.  He has lots of friends at school and is envious of them because they are all joining the HitlerJugend, the Hitler Youth – why can’t he?

His parents explain to him very succinctly why he can’t, especially after Kristallnacht, The Night of the Broken Glass, when Jews and their property were beaten and smashed:  on the surface Deutschland sparkles; behind the glitter are horrible undercurrents which culminate in a midnight visit to their home from the Gestapo, who drag Joe’s father off for questioning.  Joe finally realises that his idyllic childhood in Germany is over, especially when he and his mother are forced to flee to a series of Safe Houses on their way to Switzerland and eventual safety in Britain – where his mother immediately sends him home to her brother in New Zealand because he will be safe there.  Outrageous!

Joe doesn’t believe he can survive without his mother.  He still doesn’t know what happened to his father, and he has no idea what kind of work she does in Whitehall, but he is determined to get back to her whichever way he can – and after three years he does, stowing away on a cargo ship, nearly drowning when a U boat torpedo strikes, but he does make it back to London – just in time for the Blitz, and to find that his Mother is spying for Churchill.

Brian Falkner keeps up a cracking pace throughout Book One;  his research is top-notch and he provides a glossary and relevant photos as Joe is eventually recruited by Whitehall to train as a Junior Spy;  he is tall and fair, the perfect Aryan specimen, and his language skills are exemplary.  After the right training he will be sent back to Berlin – as an assassin:  no-one would ever suspect a tall, handsome Aryan Hitler youth as a murderer of one of their own.

Spycraft, Book Two, is set in Bavaria in Berchtesgaden, Hitler’s planning and social centre:  once again Joe has been parachuted into Germany to replace a HitlerJugend lad who mysteriously disappears from the train that Joe must take to join other young girls and boys who are the cream of the Hitler Youth.  They are to appear in a movie by acclaimed film-maker Leni Riefenstahl, a propaganda film to show the German public – and the world – the perfection of German Aryan youth under the Third Reich and, as with Book One, there is more to Joe’s mission (and more life-and-death risk) than he could possibly imagine;  the suspense and excitement never falters, and Falkner’s portrayal of all the monsters of history is first-rate.  At this stage of the series, Book Two should be classed as Young Adult as themes and the story change, but the only criticism I have so far is the lack of Book Three.  I need to know what happens!  SIX STARS!!