We Germans, by Alexander Starritt. 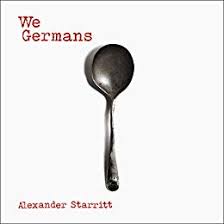 ‘What did you do in the war, Grandpa?’ was the classic question asked by all young offspring of their grandfathers after the Second World War, and some of the answers were horrifying, heart-stopping adventures, but told with verve and, if the memories weren’t too awful, depending on the age of the grandchild, related in the sure knowledge that they fought to liberate the world from Tyranny and Injustice, and a mad Leader who wanted to destroy civilisation.  For they were on the winning side.

A young Scotsman asks his German Opa the same question;  Callum’s mother is German but he has been raised in Scotland and, despite being bilingual and having regular holidays with his German grandparents in Heidelberg, he sees himself as a countryman of the Winning Side:  when he asks the question of his Opa, it is in such a way that the old man is irritated and refuses to discuss his experiences.  Callum’s curiosity is not satisfied until after the old man’s death, when a letter from Opa is discovered, addressed to him, which relates in chilling detail exactly what Opa did in the war, the war that started so gloriously for hundreds of thousands of German troops marching East to Moscow, and ended with the starving remnants of those ‘invincible’ forces trying to make their way back to a Germany that was in utter chaos:  ‘this is what I did in the war, Callum.’

Callum’s Opa went to war as a conscripted Artilleryman in 1940.  His scientific studies at University were interrupted, but he didn’t think he’d be away for very long;  he was sure that he would realise his cherished dream of being a scientist once victory was achieved, and life would be back to a comforting normality with his family.  Now it’s 1944 and he finds himself ‘foraging’ for food in the Polish countryside – any kind of food, with other starving soldiers from the remains of various regiments as they tried to reach the  German border.  He is ashamed, too, to be taking food – any kind of food – from the villages they pass through, for he knows that the inhabitants are starving as well.  But hunger has no morals.  And they know the Russian Army is not far behind:  there will be no mercy from them.

Opa’s experiences are a classic example of what it was like to be on the losing side, the side that committed crimes of such heinous savagery that the world will never forget;  a cultured nation that will always be branded by the terrible sins of supreme power and blind obedience.  By the end of this powerful narration Callum – and every reader – will know, too.   Alexander Starritt has produced a brilliant, singular morality tale, one that should be taught in schools.  SIX STARS.