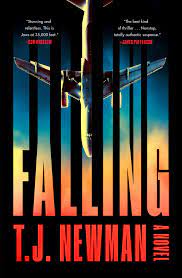 Thriller writers, this is how it’s done:  a by-the-numbers, textbook example of suspense and impending doom on every page of T. J. Newman’s debut novel ‘ Falling’ – and she knows what’s she’s writing about:  she spent ten years of her life flying the friendly skies as a flight attendant;  no-one knows better than she how staff and passengers manage long-haul flights – or how they react to danger.

Captain Bill Hoffman has been unexpectedly rostered on at the last minute to take a flight from Los Angeles to New York, leaving him very unpopular with his wife Carrie;  it’s their 10 year old son Scott’s first little-league game of the season and Bill promised he’d be there. To add to her displeasure their internet connection is down, and baby Elise is trying to walk – everywhere.  It’s not a good day!  Especially when he promised to be at home.  They part on very cool terms, just as the internet serviceman turns up;  well, thinks Bill, that’s something positive.

Except that it isn’t.  For the internet repairman turns out to be a kidnapper, holding Bill’s little family hostage at gunpoint, with the object of forcing Bill to crash the plane with upwards of 150 souls on board:  if he refuses, his family will die – and he will be able to witness that unspeakable horror on his family’s newly restored internet link.

T.J. Newman is skilful enough to have a compelling reason for the kidnapper to be taking such terrible steps to draw the world’s attention to his dreadful act:  internet repairman Sam is from Kurdistan, a country that the American President (unnamed) promised the world to if they would help his troops fight in Syria, only to leave the Kurds in the lurch by eventually withdrawing all American troops, and making all Kurds a defenceless target of chemical warfare, which killed hundreds of thousands of innocent villagers and townspeople – including Sam’s entire family.  And a prime example of Sam’s murderous determination is his Plan B if Bill refuses to crash the plane and kill everyone on board:  there is a traitor amongst them – but who?  Who will release poison gas first so that all passengers will die the horrendous death that Sam’s family suffered?  Well, no spoilers this end.

This is a very impressive effort from T. J. Newman, not least because she has vast experience of the story she tells.  It’s a bit rough around the edges but what an amazing journey we travel with her.  Having said that, I reckon there’s a lot to be said for train travel.  The world should slow down so that that form of travel becomes profitable once more.  FIVE STARS.