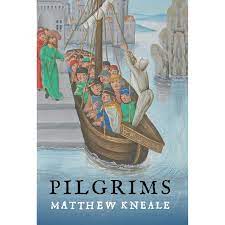 In thirteenth century England, it was common for groups of people to make journeys to various holy places in expiation of their sins – which were usually decided by their local clergy, as was the punishment, length of journey and number of prayers to be said at each shrine, depending on the gravity of the sin.  Indeed, Sir John of Baydon has been forced  by the church authorities to walk all the way to Rome to pray for forgiveness for punching the local abbot, whom he swore was trying to steal land from him.

With wife Margaret reluctantly in tow, he joins a diverse and motley band who also have Rome as a destination:  there is Tom son of Tom, also known as simple Tom;  a kindly and truly simple young bondsman who is persuaded by his crafty family to become a pilgrim after his cat dies and he can’t stop dreaming about him (Tom’s absence will free up space in their hovel);  a prosperous farmer and his wife who pretend poverty;  a rich widow and her sickly little son who may die if they don’t reach Rome to pray to St. Peter at his mighty church for the boy’s salvation.  Her avaricious sister comes along ‘to help’, and as their journey progresses, more supplicants join their little band. After enduring a nightmare trip across the channel, they all feel that God has punished them enough:  surely their way to the Holy City will now be straightforward and uneventful.  (I’m very tempted to say ‘yeah, right! here.  Get thee behind me, Satan!)

It is impossible for us who now live 800 years later to imagine the awful privation and physical sacrifices made by ordinary people, rich and poor, who were so sure that, were they able to reach their destination, their sins would disappear;  from Tom son of Tom hoping that his dear cat Sammo would get to heaven instead of plaguing his dreams, to religious zealot Matilda who is sure that when she gets to Rome, Jesus (with whom she converses all the time even though no-one else can see him) will give her a wonderful gift.  Because he said so!  And don’t forget those holier-than-thou women, mother and daughter, who are so pious they may be Jews in disguise:  vipers in the nest!

Matthew Kneale makes a fine job of recreating the teeming times of the age;  the terrible superstitions (especially regarding Jews) that were wielded by clever, unscrupulous men in the name of religion to keep the populace in thrall;  and the irrefutable fact that regardless, human nature always prevails:  the Seven Deadly Sins will exist as long as does the human race.  We haven’t changed at all!  FIVE STARS.