The Perfect Lie, by Jo Spain. 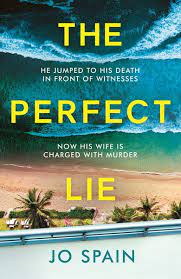 This is fast-food writing:  tasty but vitamin-free – fills the gap but has very little nutritional value.

Having said that, Jo Spain’s latest thriller is well-plotted, well-researched and in this mad day and age, almost credible.  Her characters, while two-dimensional, still manage to carry the story along at a very fast pace, and I have to say that, clever as I think I am at figuring out WhoDunnit,  I never saw this particular ending coming.  If only we were able to travel again, this would be the perfect Airport and Beach read.  How the world has changed!

And Irish Erin Kennedy’s life changed in the space of hours, from waking in the morning with her African American Detective Husband, preparing to go to her job as an editor for a Publishing firm, to the disintegration of her world when her husband is visited by his Police colleagues – who are there to arrest him for corruption and, instead of leaving with them, he flings himself to his death from their fourth-floor balcony.

It goes without saying that Erin’s husband had many secrets, and Erin had no idea of any of them;  she can’t believe that she could have been so woefully ignorant of his problems, but when someone doesn’t want their loved one to know things, they get very good at the cover-up, especially if one is a Detective.  Still, Erin owes it to herself and his family to try to expose the truth, whatever that may be;  she just hopes she will be brave enough to accept it, especially if it destroys completely her vision of the man she thought she knew and loved.

Until she finds herself on trial for murder –the murder of her husband, a crime too ludicrous even to contemplate, but Erin’s life has taken such a bizarre turn since her husband’s death that this is God just playing with her again:  having acknowledged that, can God stop faffing around and get her acquitted from this murder charge that will have her in prison for the rest of her life.  Please God.

Ms Spain tells a parallel story of minor characters in flashbacks that link up cleverly with the main protagonists by the time everything is done and dusted, but I wonder if she just got sick of her story (and/or Erin!) and couldn’t be bothered fleshing things out.  What a shame.  THREE STARS.