A Long Way From Home, by Peter Carey 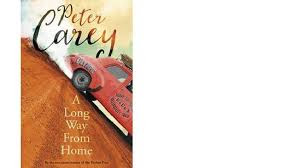 March has been a great month for me – I am lucky to have read so many stunning books in four weeks, and Peter Carey’s latest story is so good that I have to include it in this month’s great reads, for that it was it is: a truly great read; a riotous comedy on the surface, and a stark, unforgiving indictment of Australian Colonialism beneath.

Irene Bobs narrates alternate chapters: in 1953 she is most happily married to her diminutive husband Titch, ‘the best car salesman in West Victoria’; she is fiercely protective of little Titch, especially in regard to his tyrant of a father, a loudmouth blowhard who has abused and belittled Titch all his young life: well, that’s not going to happen anymore, especially when she and Titch have a chance to take on the new GMHolden franchise by entering a Holden in the Redex Trial, a make-or-break car race circumnavigating Australia.

Irene is a crash-hot driver, taught by her husband; she will be the co-driver even though women are not recognised as such in the race (The Little Woman should be at home with the kids) but their neighbour and navigator Willie Bachhuber will satisfy official regulations. Out from under the hated fatherly thumb at last! Until the hated father turns up at the starting line in Sydney: he’s not going to let his pathetic little son steal any kind of a march on him - the scene is set for treachery most foul.

Neighbour Willie narrates the story as well; he is tall, blonde and Aryan, raised as a Lutheran by German missionary parents and has already experienced racist abuse in the few years after the war ended, but that is the least of his concerns: he has left his wife because she presented him with a black child, proof positive of adultery that he never suspected, and his job as a school teacher has been terminated for losing his temper at being called a ‘Balt’ and hanging the guilty boy out of a high window until he apologised. Yes, it’s time for him to go on a long road trip too.

Well. There’s nothing like a long car journey to make or break relationships and the Redex Car Trial is no different: what began as the prospect of adventure, excitement and a test of stamina and inner strength, ends in grief, disillusionment and the time-worn revelation that people are never what they seem, particularly when ancestry and degrees of ‘blackness’ are the subject.

Peter Carey loves his country, but he casts a pitiless and clinical eye on its shameful Colonial past and the unspeakable crimes perpetrated by Pastoralists against the aboriginal inhabitants, the first dwellers in the great Red land of Australia. No-one escapes his truth; nor should they: nothing is hidden under the rug in this story. Mr Carey has twice won the Booker Prize – ‘A Long Way Home’ is a worthy contender for more honours.