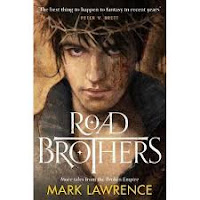 For lovers of the Fantasy genre (and there are SO many!) it has been too long since Mark Lawrence has fed our addiction – well, not really; it just seems that way, and I am really envious of a friend to whom I recommended the Broken Empire trilogy: he gets to binge-read all three books in one hit if he likes them, and I can’t imagine him NOT finding those page-turners irresistible.

As a sop to his fans, Mr Lawrence has produced a book of short stories dealing with the origins of some of the characters who support Honorous Jorg Ancrath, Prince of Orlanth, as he rampages his way across the remains of nuclear-wasted Europe, initially meeting derision and disbelief because of his youth, then horror and loathing at his ruthless disregard for the rules of war, his complete lack of honour in battle, and his brilliant strategies.

Jorg fights to win, and he fights dirty. He sweeps like a plague across the land, and those who follow him don’t always agree with his methods but are powerless to stop him. They just obey without question, including brother Sim, who in the guise of a story-teller has been ordered to charm and bewitch a pretty and frivolous princess, tricking her into smuggling him into her heavily-guarded chamber so that she may listen to his seductive tale – until she finds that it has a fatal ending for herself, and death and defeat for her people as brother Sim kills her guards and finds an entrance for Jorg’s troops to storm the castle.

The Nuban: that towering black man whose origins are as mysterious as his devotion to Jorg. He is indeed a mighty warrior, but where did he learn his skills, and how has he ended up so far from his homeland in Afrique, and why was he aimlessly wandering with the band of outlaws and mercenaries that Jorg decided to join? Makin, a member of Jorg’s father King Olidan’s guard, whose devotion becomes absolute when he rescues Jorg from the castle’s burning infirmary – and realised that no-one seemed to care whether 9 year old prince Jorg lived or died, least of all his father. Mr Lawrence has done it again – produced yet another page-turner which has us all reading feverishly, then grinding our teeth because his great stories have come to an end.

I’m not usually a fan of short stories – I don’t like to have to switch subjects and actions after short intervals, but ‘Road Brothers’ is like meeting great old friends (and enemies!) after too long an absence.  It was a pleasure to greet them again.