Now We Are Dead, by Stuart MacBride 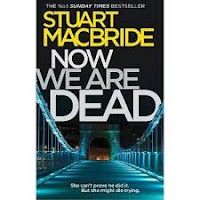 Mr MacBride’s archetypical burnt-out but brilliant copper Logan Macrae features only peripherally here; instead the floor is given to Detective Chief Inspector Roberta Steel, proudly gay and relentless enemy of Aberdeen’s bad guys – until her illegal efforts to put rapist Jack Wallace behind bars result in exposure, a court case, and demotion to Detective Sergeant. And an insatiable desire for revenge against the Motherfunker who dobbed her in – Logan Macrae. (See review below).

To add awful insult to terrible injury, the brutal rapes are still happening, and with each new crime, the ‘raping wee shite’ she put away (now released from prison and trumpeting his innocence all over the media) cannot resist sending a video of himself and ‘friends’ going to the movies, having dinner, clubbing – all at the exact times that the rapes occurred: Roberta knows Wallace is behind each crime, but proof is impossible to come by and it is not long before she is in trouble with her superiors – again! – for surveilling the Wee Shite’s house, much to his delight; he has a video of her doing just that and he has made an official complaint of harassment to her boss. Just what she needs. To make matters even worse, she is told that if she keeps up with the harassment, she won’t just be losing her job, but her behaviour will be terminating the job of her long-suffering but protective assistant Detective Constable Tufty, in her opinion a ‘useless wee spud’ – but her useless wee spud. She’s on a final warning.

There is an element of Keystone Cops to the opening chapters of ‘Now We Are Dead’; there is lots of comedy, clever repartee, not to mention cheeky young kids training to be tomorrow’s crims, but Mr MacBride brings us all back to cruel, stark reality with Steel and Tufty’s efforts to prosecute a debt collector for ruthlessly beating an old lady and cooking her little dog in her microwave, and the discovery by them of an eight month old baby left in his cot with a tin of dog food while his mother died from an overdose on the filthy mattress in front of him. In both cases, the neighbours refuse to give evidence: in the baby’s case the neighbours got out the air freshener when the smells got worse. Which proves that such is Mr MacBride’s storytelling skill he can take readers anywhere he likes on the emotional spectrum that he chooses, and it is not always a comfortable journey.

It is clear too, that Steel and Tufty are in line for a very messy showdown with Raping Wee Shite Jack Wallace; once again it isn’t pretty, but again Mr MacBride demonstrates his effortless mastery of the Crime genre. My only criticism is that he doesn’t write his stories quickly enough: there should be one every six months, not a measly one per year!