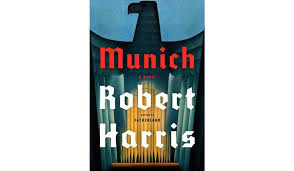 Mr Harris is well known for constructing thrillers out of historical events, the outcomes of which are already known (see ‘Conclave’ review below), and he repeats the process with ‘Munich’, a fictitious account of the last-ditch talks held in that Southern German city between Dictators Adolf Hitler and Benito Mussolini, and British Prime Minister Neville Chamberlain in an effort to avoid another World War.

Chamberlain wants to avoid war at any cost, for Britain is woefully underprepared for conflict; Hitler has been rearming for years; he wants to give Germans ‘Lebensraum’, room to spread out, and the ideal way to do that is to invade his neighbours – all of whom are allied with each other, or with Britain. Diplomacy seems not to be working effectively; the Devil is indeed in the detail and Chamberlain’s ‘Politics of appeasement’ are feared to be ineffectual. Leaping into this explosive mix are those who would depose Hitler, some by any means – they are ardent German Nationalists but not Nazis, even though they belong to the Party (the Politics of Expedience!), they don’t want their country plunged into another crippling conflict not twenty years after the last one: the Austrian Corporal has to go.

To that end one of a secret band of plotters smuggles into England compelling proof of Hitler’s plans for war, giving the lie to the public perception that the Reich Chancellor desires peace in Europe if only the Sudetenland, rightfully Germany’s is returned from Czechoslovakia.

The secret papers have been delivered to Hugh Legat, a minor diplomat in the British Foreign Office, at the behest of an old friend from Oxford days, Paul Von Hartmann; he wants Hugh to warn his superiors of Hitler’s perfidy, and Mr Harris is such a competent writer that he can invest suspense into every hour of the factual events that are now history: the reader sits in Hitler’s apartment with Chamberlain and Mussolini, all the time trying to prod Chamberlain into seeing what a liar Hitler is, that he has no intention of ever honouring any promises he might make, and that war is as inevitable as the sunrise.

There are some interesting character studies in ‘Munich’, particularly Mr Harris’s interpretation of Mr Chamberlain: ‘ how odd that a man so fundamentally shy should thrust himself into public life and fight his way to the top’, a politician savvy and shrewd enough to know that his pact with Hitler was on very shaky ground, so ‘ more than half of next year’s government expenditure would be devoted to arms’, for Hitler would be sure the cross the line eventually. Britain must make hay while the sun shines - despite the ringing assurance of ‘peace for our time’ the heady relief that the entire country feels is only temporary.

And the rest is History.