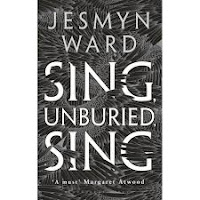 What a pure pleasure it is to read another book by Jesmyn Ward, author of ‘Salvage the Bones’, a story I reviewed in 2012 and have never forgotten,  (See review below), simply because her stories are unforgettable. It is JoJo’s thirteenth birthday. He will be a man soon, though he tries to be one now, so that he can help his grandfather with all the hard work on his little property, and care for his three year old sister Kayla, the centre of their love and protection, for she is the one who needs them most.  The children’s beloved grandmother is bedridden with terminal cancer but their mother Leonie comes and goes as she pleases, giving the bird to every establishment rule in the Southern Mississippi Book of Black and White Behaviour. For Leonie is Black, but Michael, the father of her children is White, the son of the local Sheriff who, despite having two grandchildren from his only son, still calls Leonie The Nigger and won’t let her on his property.  Southern racism is bred in the bone – but that is not the worst thing, unbelievably.  No, the worst thing is that Leonie is a drug addict and Michael has been imprisoned for three years for cooking meth. Yes, JoJo needs to become a man soon so that he can protect the family he has left. Leonie is not up for the job – ‘she kill things’, purely from neglect thinks JoJo, but she horrifies him anew with a mad idea for herself and the two children ‘as a family’ to take a two-day car trip to collect Michael on the day he is released from prison.Her father is unable to prevent her because of his sick wife, so the odyssey begins, and such is Ms Ward’s complete mastery of readers’ minds and hearts, that we endure every awful mile with Kayla sick and crying in her car seat, JoJo emanating dislike and disapproval in frosty waves towards his mother (whom he calls Leonie;  she doesn’t deserve to be called Mama), and Leonie refusing to give her children any refreshments out of sheer jealously at their closeness. Ms Ward displays all the mean human traits here but understanding of each character comes as Leonie, JoJo and an unquiet Spirit called Richie, a boy from Grandfather’s bleak past narrate each chapter. Secrets are exposed, a terrible event in the family history is retold and, while justice will never be theirs, JoJo, Kayla and their loving grandfather share a peace, contentment and hope previously denied. This is a wonderful book. Ms Ward’s prose sings us an aria, plaintive, harmonious and perfect: how blessed we are to have writers of this calibre among us. SIX STARS!!
at 18:28